Allen Joseph Ellender (September 24, 1890 – July 27, 1972) was a Democrat politician from Houma in Terrebonne Parish in the U.S. state of Louisiana. An original follower of Huey Long, Ellender was elected in 1936 as Long's permanent successor in the United States Senate, replacing Long's widow, Rose McConnell Long (1892–1970). Governor Oscar Kelly Allen (1882–1936) had won the party nomination for the Senate but died before he could be formally elected. In the second balloting, Ellender defeated U.S. Representative John Nicholas Sandlin, Sr. (1872–1957), a fellow Democrat from Minden in Webster Parish.[1]

Ellender was a native of Terrebonne Parish in south Louisiana and a lawyer who graduated from Tulane University in New Orleans.

Prior to his Senate tenure, he served from 1924 to 1936 as a member of the Louisiana House of Representatives from Terrebonne Parish. He was the House Speaker from 1932 until 1936. 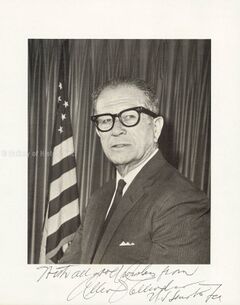 After the assassination of Sen. Huey Pierce Long, his wife Rose McConnell Long was appointed to the seat to fill the vacancy. She declined to run for a full term, and Ellender won the 1936 election to succeed her.[2][3]

In the United States Senate, he was known for his support for school segregation through the signing in 1956 of the Southern Manifesto.[4] Ellender, a New Dealer,[5] was one of only twenty Democrats to vote against killing Roosevelt's 1937 court packing scheme.[6] Ellender was also an advocate of farm subsidies and the school lunch program, and he opposed the investigations into communist infiltration of the U.S. government conducted prior to 1954 by his colleague Joseph McCarthy, voting in favor of censuring the Wisconsin Republican.[7] Though Ellender later opposed the Vietnam War, he voted for the Gulf of Tonkin Resolution of 1964.[8] During his Senate tenure he was chairman of the Agriculture Committee and then the Appropriations Committee. While he was considered a relatively more conservative Democrat in comparison to his party colleagues, he held some liberal positions such as adamantly supporting social programs championed by President Lyndon B. Johnson.[9][10] Ellender was furthermore considered a "progressive" when it came to censorship, education, public housing, and separation of church and state.[11]

Ellender opposed anti-lynching measures, voting twice along with the majority of Senate Democrats to kill such rider amendments introduced by Royal Copeland in late June 1937.[12][13]

Following the 1946 Senate election in Mississippi where segregationist demagogue Theodore Bilbo intimidated and threatened blacks, most of whom then were not then voters, Senate Republicans, who just gained a bare majority in the election cycle, moved to block him from being seated.[14] Initially, a five-member Senate committee comprising of a 3–2 Democrat majority which was headed by Ellender headed to Missisippi to investigate.[15] Despite testimonies by blacks who were threatened and viciously attacked by Jim Crow white supremacists, Ellender defended the racist voter suppression in arguing that they were caused by "tradition and custom" rather than Bilbo's incitement of violence; the committee voted along party lines to clear Bilbo; the two Republicans, Bourke Hickenlooper and Styles Bridges, dissented from the verdict.[15] However, the new Republican majority in the 80th Congress stood in refusal to seat Bilbo. Ellender's Louisiana senatorial colleague John H. Overton attempted to maneuver around this by introducing resolutions to allow the Mississippi demagogue to be seated while the investigations continued, as then it would take a two-thirds majority to remove him from Congress.[15] Both were tabled by bipartisan majorities.[16][17] Mississippi segregationist governor Fielding L. Wright then announced that if the Senate refused to seat Bilbo, he would name the latter as the replacement.[15] Ultimately, Bilbo, suffering from oral cancer after decades of inciting violence and promoting bigotry, never returned to the Senate due to poor health and died in August 1947. Ellender praised the Mississippi demagogue's legacy of violent incitements as having "died a martyr to southern traditions."[15]

In 1948, when other Southern Democrats defected to the Dixiecrat presidential campaign of Strom Thurmond, Ellender remained loyal to Harry S. Truman. Although Thurmond was the official Democratic nominee in Louisiana, Truman's name was also added to the ballot by a special session of the state legislature.

Ellender served in the upper house of Congress from 1937 until his death in the summer of 1972.[20] At the time he was campaigning for yet another term in the Senate. Ellender was succeeded by interim Senator Elaine Edwards, the first wife of then Governor Edwin Edwards. His permanent successor was his chief primary rival in 1972, former state Senator J. Bennett Johnston, Jr., of Shreveport, who held the U.S. Senate seat until his retirement in January 1997. Johnston had also been Edwin Edwards' rival for the 1971 Democratic gubernatorial nomination.

During his last two years of office, Ellender was the Dean of the United States Senate. His long-term senatorial colleague was fellow Louisiana Democrat Russell Long, the older son of Huey Long.

Ellender was baptized a Roman Catholic, later listing himself as a Presbyterian, though belonged to no church in his adult life.[21]