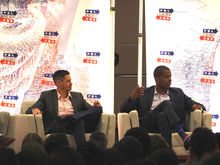 Kyle Kulinski at the political convention Politicon 2018. Kulinski is the individual on the left.

Secular Talk is a left-leaning online talk show on YouTube, hosted by Kyle Kulinski. The program focuses on modern American politics from a strongly liberal and secular perspective. Kyle Kulinski is an atheist who describes himself as a new atheist and a progressive atheist.[1] Kulinski admires Richard Dawkins, but he does not always agree with other New Atheists on particular points.[2] Like many other agnostics/atheists, Kyle Kulinski engages in frequent profanity (see: Atheism and profanity).[3]

Kulinski currently resides in New Rochelle, New York. He started the Secular Talk YouTube channel in 2008, and he joined The Young Turks network in 2013.

He has a radio show on BlogTalkRadio that airs live on weekdays (at 4pm Eastern Time), where he spends 1 1/2 hours recording segments that will later be uploaded on his YouTube channel. These segments include things such as rebuttals of statements by Christian journalists/radio hosts, reporting news and commenting on them from a liberal and secular perspective.

In a YouTube video, Kulinski says the best argument for atheism is:

Kulinsk's video is directed towards deists.[5] Yet, it is extremely common for deists to posit that God is eternal (Historically, this has been the case as well).[6][7][8][9][10]