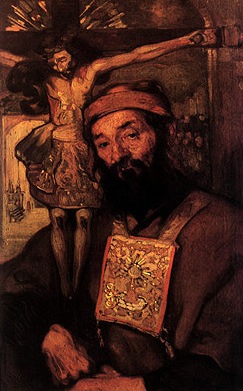 "Son of Man" is a common mistranslation, preferred by liberals, which obscures Jesus's divinity. Jesus used an artful phrase to convey his divinity without committing the capital offense of blasphemy, which would have terminated His ministry before it completed.

A better English translation which conveys the divinity would be "The Son as man."[1] In other words, simply replace "of" with "as" to restore the intended implication of divinity, without committing blasphemy under the strict rules of the time. The versatility of "as" in modern English conveys the meaning of the awkward, unusual Greek phrase better than "of" does.

The then-blasphemous declaration by Stephen which caused him to be martyred is better translated as "The Son as man" rather than as "the Son of Man":

The use of the phrase in Luke 6:5 shows that "The Son as man" makes more sense than "Son of man":

The use of the phrase in Mark 10:45 illustrates the flaws in the "Son of Man" and the superiority of the "Son as man" as the English translation:

In Luke 24:7 use of the phrase "Son of Man" is confusing to the meaning, while use of "Son as man" would be much clearer:

Numerous other passages translate in a stronger way if "Son as man" is used rather than "Son of man," such as: "you may be judged worthy ... to stand before the Son as man."[2]

Of necessity, Jesus could only imply during his ministry that he was divine, in order to avoid being put to death for blasphemy before his preaching and works were completed.[3] Because of blasphemy laws, Jesus often could only imply his divinity without expressly saying so. [4]

Jesus' curing of the beggar blind from birth was followed by Jesus asking him, "Do you believe in the Son of Man?" He responded, "Who is he, sir, that I may believe in him?" Jesus replied, "You have seen him, the one speaking with you is he." The formerly blind man responded, "I do believe, Lord," and he worshiped Him.[5] The translation "Son of Man" in English in that passage fails to capture the implication of "Son of God," which was obviously meant.[6]

The Greek version of how Jesus described himself is the awkward phrase "ὁ υἱὸς τοὺ ἀνθρώπου," which can be translated as "the Son, a human being" or, more simply, "the Son as man."[7] A full, wordy translation of the Greek would be "The Son, with the character of man." The Greek is likely a translation of an Aramaic phrase "bar enosha," which has the connotation of "a human."[8] The Greek wording implies the divinity of Jesus in a non-blasphemous manner, without Jesus expressly claiming to be God. Faith is then required to accept the obvious implication that Jesus was divine, and his opponents thereby had a difficult time catching him in the crime of blasphemy during his ministry.[9]

Notice that the ancient Greek did not have the punctuation of a comma to convey meaning, as English does: ὁ υἱὸς ὁ ἄνθρωπος is the straightforward Greek version of the English "the Son, a human being." The comma is omitted without loss of meaning.

The term highlights Jesus's humanity and how He came to serve and save mankind, but its translation should also emphasize that Jesus was God and not merely man. The term also illustrates how the best of the public comes from ordinary people rather than the elite.

The Common English Bible, which includes a superb pro-life rendition of one controversial verse, translates the Greek for "Son of Man" as "Human One." The translators explain, with other examples, that "Greek usage often refers to 'a son of x' in the sense of 'one who has the character of ‘x.’'"[10]

Prophecy in Psalms and Ezekiel

Psalms contains a prophecy of the "Son of Man" as later quoted by the Epistle to the Hebrews (which was possibly written by Jesus himself):

When I look at your heavens, the work of your fingers,

the moon and the stars, which you have set in place,

what is man that you are mindful of him,

and the son of man that you care for him?

and crowned him with glory and honor.

You have given him dominion over the works of your hands;

you have put all things under his feet,

Ezekiel also contains a prophecy of the Son of Man, by describing him as "perfection":

The pedantic translation of "ὁ υἱὸς τοὺ ἀνθρώπου" is "the Son of the Man," as τοὺ ἀνθρώπου is the genitive of ὁ ἄνθρωπος - (the) man. This translation is used, e.g., in the King James Bible, the New American Standard Bible or the New International Version. This rendition is inconsistent with how the similar Greek phrase that replaces "of man" with "of peace" is better translated as "a peaceful person," "someone who promotes peace," or "a man of peace" [11] in Luke 10:6, rather than as the literal phrase "a son of peace."[12] (a translation used in the King James Bible and the English Standard Version.) But in English the overly literal translation as "the Son of Man" is incoherent, and the phrase interferes with the clear logic of the important passage surrounding John 3:16.

An analogous phrase, with a genitive that helps define an "ambiguous or metaphorical head noun," occurs at 2 Corinthians 5:5 ("Who has given to us the down payment of the Spirit" is better translated as " ... "the down payment which is the Spirit").[13]

The logic of Christianity is that good and insights do not arise from the self-centered elite, but from the opposite. "Man" is fallen and cannot redeem himself, and neither could a "Son of Man." Instead, "the Son, a man" brought salvation in a way that liberals could never anticipate and prevent.

Though the Greek version is clear, the Hebrew term for "Son of Man" could be a mistranslation of "Son of Adam," which emphasized how Jesus was a son (male descendant) of Adam. This meaning is suggested by Proverbs 8:31, where "sons of Adam" was translated by the KJV as "sons of men."

This possible mistranslation in English Bibles then permitted Darwin to deny, with his theory of evolution, that Adam existed as described in the Bible. Had Jesus been known in the English-speaking world as the "Son of Adam," the theory of evolution would have been a non-starter.

Fulfillment of a Prophecy

It is possible that its first use in reference to Jesus Christ is in the Book of Daniel, 7:13, in a prophecy of the Messiah:

But notice that the divine context is clear in this verse of Daniel, and many translations say "a son of man" rather than "the son of man" here.