Stephen Gerald Breyer (born August 15, 1938) is an Associate Justice of the U.S. Supreme Court, and is one of the most consistent liberal votes on the court.

But rather than show admiration and gratitude, leftists who exhibit the mentality of spoiled children are sharply criticizing Justice Breyer for not retiring early. A left-wing review of Justice Breyer's new book in 2021 was more critical than most conservatives would be.[1] In 2022, it was finally announced that he would retire at the end of the term.[2]

In 1964 he served as a law clerk to Supreme Court Justice Arthur Goldberg. Following his clerkship, Breyer held several government posts, including Special Assistant to the Assistant U.S. Attorney General for Antitrust, Assistant Special Prosecutor for the Watergate Special Prosecution Force, and Special Counsel and Chief Counsel to the U.S. Senate Judiciary Committee. Breyer is credited with playing a key role in obtaining deregulation of the airline industry in the late 1970s. Breyer was a member of the faculty of Harvard Law School from 1967 to 1994 and the Harvard University Kennedy School of Government from 1977 to 1980.

Justice Breyer also served on the United States Sentencing Commission between 1985 and 1989, where he helped develop the federal Sentencing Guidelines to impose uniformity on sentencing in all federal criminal cases.

He was nominated to the Supreme Court by President Clinton, and joined the court August 3, 1994.[3] Breyer's retirement was leaked by the Biden White House to his surprise well in advance of his planned departure[4] so that Biden could hold to his promise to appoint a replacement who is judged, not by the content of their character, but by the color of their skin.[5] 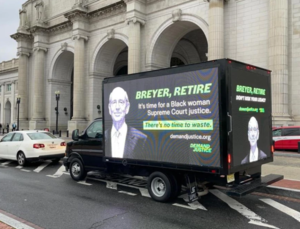 Progressives mounted a highly visible campaign to get Breyer to retire in advance of the 2022 midterm elections.[6]

On issues of religion, Justice Breyer is the least liberal of the former five-Justice liberal voting bloc on the Court, that included fellow former Justices John Paul Stevens, David Souter, Ruth Bader Ginsburg, and Sandra Day O'Connor. Justice Breyer broke with that voting bloc to provide the pivotal fifth vote to allow the Texas government to maintain a monument to the Ten Commandments on its capitol grounds in Van Orden v. Perry.

According to Senator Arlen Specter, he had a chance encounter with Justice Breyer at a summer meeting after the end of the 2006-2007 term, and Specter publicly stated that Justice Breyer told him there were "eight" decisions in which the Roberts Court had overruled precedent.[8] Specter then publicly said he was going to review the testimony provided by nominees Chief Justice John Roberts and Justice Sam Alito to the Senate Judiciary Committee to see if they were abiding by it.

On the issue of continued advisory use of the controversial Sentencing Guidelines, Justice Breyer voted for preserving rather than invalidating them.

Justice Breyer agrees with the belief that the United States Constitution is a Living Constitution.

Despite his more liberal views in the court, he was not above admonishing those of the liberal viewpoint if they went too far.[9]

Supreme Court Justice Stephen Breyer has alleged that the Founding Fathers never intended for guns to go unregulated. Breyer believes that the Second Amendment allows for restrictions on the individual, including an all-out ban on handguns in the nation's capital.[10]