A new upswing in DJIA stocks then started immediately, as did a general business recovery. 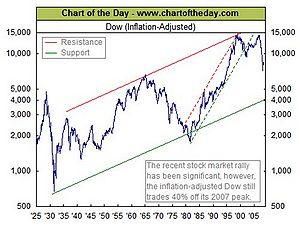 Business had topped out mildly, a month before the first crash; a gradual mild decline continued to April 1930, then fell sharply into a depression simultaneously with the end of the 1930 stock market rally. The business decline halted in December 1930, stayed level for 6 months, then plunged again in steep economic decline that didn’t lose its downward momentum for a full year, until July 1932. Business improved intermittently thereafter but still remained at depression levels through most of the decade of the 1930s except for a short recovery in 1936–37.[1]