↑ Problems with the Mary of Roman Catholicism

↑ The Biblical, Catholic, and Occult View of Mary

could be offensive to people that venerate the Blessed Virgin Mary.

I removed the first source as I found a better Protestant source. Secondly, the "Cult of Mary" articles are from a world wide known Protestant preacher and reflects many Protestants views. I don't think we have to respect Catholics by squelching Protestant views. Conservative 20:58, 10 May 2007 (EDT)

For a better understanding I have found a link that explains the Protestant point of view but without offending Catholic faith. See: http://www.eich.com/allan/Catholics%20and%20Protestants%20believe.htm --User:Joaquín Martínez, talk 09:24, 14 May 2007 (EDT)

This is the image of Virgin Mary removed by User:Conservative:

Conservative: I am sorry but as a protestant I think we need to have more neutral pictures.

Can't we have more neutral pictures that protestants and catholics could agree on. How about another nice madonna picture or a picture of mary at the crucifixion? Conservative 22:46, 10 May 2007 (EDT) 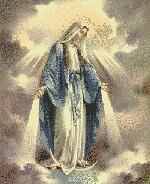 This one also was removed on: 22:44, 10 May 2007 Conservative (Talk | contribs) (can't we have more neutral pictures that protestants and catholics could agree on. how about another nice madonna picture or a picture of mary at the crucifixion.)

I vote to rename the page (misleading title)[edit]

Mary was not always a virgin, just when she had Jesus. Mary had other children as well. The title makes it sound like she was always a virgin. Rather I would have something like "Mary (mother of Jesus)" as a title. --Ymmotrojam 00:27, 2 June 2007 (EDT)

"Her" in reference to Mary is capitalized?[edit]

This highly implies that Mary is at the same rank as Jesus or God. I don't agree with it. Does anyone have a reference or substantiation for capitalizing "her"? PhyllisS 18:38, 28 August 2009 (EDT)

Good point. The NAB, the official Catholic Bible version, does not capitalize this pronoun. See, e.g., Luke 1:28 ("Mary said, 'Behold, I am the handmaid of the Lord. May it be done to me according to your word.' Then the angel departed from her." But I'm not sure modern Bibles capitalize pronouns for Jesus either!--Andy Schlafly 18:47, 28 August 2009 (EDT)

The New American Standard Version actually does capitalize "him" with reference to Jesus, as seen in this snippet of John: http://www.biblegateway.com/passage/?search=John+2&version=NASB I don't know - is the New American STANDARD Version different from the New American Version?

Yes, the New American Standard Bible is a Protestant translation, while the New American Bible is a Catholic translation. They are completely different despite their confusingly similar names and despite both being published in the early 1970s in almost the same year.--Andy Schlafly 10:35, 29 August 2009 (EDT)

The point is that the only persons whose personal pronouns some Bibles capitalize is God/Christ, and elevating Mary to that level is most certainly a POV, and not a Biblical or necessarily a conservative one.

Locked article too brief and slanted[edit]

As cursory as it is, the article is decidedly slanted to a Catholic position. In particular, the beginning presents as additional names "Blessed Virgin Mary" or "Our Lady" "for Mary the mother of our Lord," but which are Catholic titles, and should be noted as such later on. When it does mention Protestants, it states that "Protestants believe that the veneration of Mary is counter to what the Bible teaches", which is misleading, as it fails to specify the manner of veneration which Protestants protest, and that this is more of a mark of Evangelicals, who seek to go by the Bible above all, rather than that of Protestant in liberal Christianity.

Doctrinally, the reasons for this division are multiple, as not one example exist in the Bible where any believer ever prayed to anyone in Heaven but the Lord, nor is there any exhortation to pray to anyone else (while praying to the Queen of Heaven is shown to be a pagan practice). Nor is there any need to pray to anyone else in Heaven, as the Lord Jesus is presented as the believers immediate and only Heavenly intercessor, (Heb. 7:25) who alone is qualified to be such. (Heb. 4:14,15) As for the logic that since we pray for each other here on earth, then we should pray to the departed in glory, that has less Biblical warrant than holding that marriage exist in Heaven between believers. (Mt. 23:29,30) In addition, a marriage in which both remain celibate has no Biblical example, and is contrary to the Lord's description of marriage, (Mt. 19:4,5) while forcing "brethen, including Jesus being "an alien unto my mother's children" (Ps. 69:8) to mean relative is forcing the text, and the article's defense (as well as that of others) of "until" to mean other that an expected terminus is extremely weak. To formulate such doctrines in the absence of any real Biblical warrant and against the evidence we do have is presumptuous.

The article also fails to deal (pro and con) with the R.C. doctrine of Mary being immaculately preserved from sin, and the infallibly declared to be bodily assumption to glory, as well as the disputed appellation "Mother of God." Mary was a holy and noble women, who was used to bring forth the Divine Son of God, who paradoxically, was her creator, and she is not properly called the Mother of God.Daniel1212 21:34, 10 September 2009 (EDT)

I'd like to expand this section with more about Mary in Islam and the association in Buddhism of Mary with Kannon, the bodhisattva of compassion. Would that be possible? ChrisFV 16:20, 5 November 2009 (EST)

The citation of Mark 16:6-7 "Mary Magdalene, Mary (the mother of Jesus), and Salome..." (boldface emphasis added) has replaced the name of "James" with "Jesus" instead. This is false. No authenticated extant manuscript text, early or late, of which I am aware places the name of "Jesus" there.
--Dataclarifier (talk) 15:59, 3 August 2018 (EDT)

See biblehub.com site for multiple versions of Mark 16:1. None of them has the name of Jesus Ίησούν in place of James Ίακώβου. The false quotation from the link to allaboutjesus.org, according to the ref note, cites Mark 16:6-7 as the source. The text quoted references the preparation of spices in Mark 16 which is found only in Mark 16:1. The linked site for the false quote is thus proven to be unreliable as a source and really should be replaced, for the sake of encyclopedic credibility. --Dataclarifier (talk) 03:48, 19 September 2019 (EDT)