Related follow-up: Then why is the "surrounded islands" shown on this page on painting? I'm no art student, but if this is an example of a painting (which I highly doubt), then it definitely needs an explanation. I will remove the image for the time being because it completely looks out of place in its current form. --JBrown 12:07, 11 May 2008 (EDT)

So we're keeping a non-painting as an example for painting because the artist had also made a painting that day? Please, either replace the image with the painting in question or delete it. Right now, that part of the entry flat out makes no sense. --JBrown 12:53, 11 May 2008 (EDT)

Perhaps we could see if there was a copy of the painting which is in the public domain. That way we could put the two pictures side to side to provide a comparison between subject and result (although there are probably better examples out there). StatsMsn 06:17, 13 May 2008 (EDT)

I came here to say "why is such an obvious non-painting, by an artist who is not primarily known as a painter, included (and given such prominence) in an article about painting?" I see I'm not the first! Why is this even (apparently, reading between the lines of the above comments) contentious? Delete it. Humblpi 08:57, 13 May 2008 (EDT)

In the article there is: "Painters have the freedom to invent their own visual language and to experiment with light and new forms, materials and techniques." The image shows precisely that; an example that shows how wide is the world of painters. --User:Joaquín Martínez, talk 16:48, 13 May 2008 (EDT) 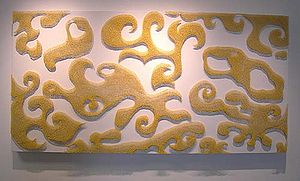 The juries of that art exposition had to learn it.

Quilting pins and paint on prepared board

As the article says:

Painters have the freedom to invent their own visual language and to experiment with light and new forms, materials and techniques.

While the quote is correct in context, you are misapplying it. It does not mean that a sculpture is a painting, or an installation piece is a painting. Kellner's piece, for example, was ultimately not defined as installation art because the pins were not applied directly to the gallery wall as originally intended. By misusing the "new forms" quotation above you have redefined the art world. This article talk page, for example, can now be called a painting: I have simply used a new material and technique to paint it. I call it פּופּיק :) 10px Fox (talk|contribs) 10:35, 14 May 2008 (EDT)

In art, for centuries experts do not agree of what is this or the other. I can not expect to have universal applause. I could accept to remove the image in question after a serious debate. --User:Joaquín Martínez, talk 10:56, 14 May 2008 (EDT)

Some adhere to a rigid definition of "art", such as paintings, sculpture and other traditional genres, while others believe that art should not be strictly defined, and thus believe that anything progressive may be labeled as such. Source:Our own article on Aesthetics.

Joaquín, you are plucking random quotes and applying them incorrectly. I'm sure this isn't at all deliberate, and is more a linguistic thing than anything else, but you are butchering what the quotes originally intended to mean. Most painting is of course art: slapping a coat of white emulsion on my bathroom ceiling isn't strictly art. The quote you used above is about defining the boundaries of "art" - it has nothing to do with justifying a sculpture being labelled a painting. 10px Fox (talk|contribs) 11:18, 14 May 2008 (EDT)

Well, that's not really an option - the article won't fix itself. People will become bored of trying to explain in as inoffensive manner as possible that you are wrong and someone will have to come along and completely rewrite the entire thing from scratch. 10px Fox (talk|contribs) 11:37, 14 May 2008 (EDT)

Joaquín, I agree with Fox here. While painting may be "art" that does not mean that all art is painting, and while "installation art" may be considered art, I know of no-one who would consider it painting. I don't wish to be rude here but is there perhaps a language difference? I think the islands picture should be moved to an article on installation art which is worthy of its own page. BrianCo 17:38, 14 May 2008 (EDT)

I have invited Sharon and Bethany to be the jury in this debate. It has to be well done with time to search for the opinion of experts and time to consider the arguments. NOT TO CHANGE THING IN A HURRY! I expect to be clear enough. --User:Joaquín Martínez, talk 17:42, 14 May 2008 (EDT)

Care to have a third vote on the jury? Setting aside what use was made of it, Aschlflay seemed pleased with my last stab at resolving article disputes, and I'm trying to find ways to be helpful around here. Aziraphale 18:09, 14 May 2008 (EDT)

On his own words:

Christo: First, we should discuss why it takes such a long time. I'd like to explain why some art historians, critics or writers have some problems in grasping this project.

Christo: All interpretations are valid.

Jeanne-Claude: But if you told a painter who has finished painting a horse, "This is a cow," the painter would be very furious.

Christo: The use of cloth in the history of art is as old as the history of art. Artists use the fabric in sculpture and painting and the fabric has taken enormous dimensions, enormous sizes [Christo shows a book, with a multitude of classical paintings and sculptures in which fabric has a dominant role]. The fabric creates formality. This is why we do this in all the projects, we play with the fabric, using the resource of that material to create these works.

As artists Christo and Jeanne-Claude are as unclassifiable as their art. They are at once painter and sculptor, and yet neither... [2] --User:Joaquín Martínez, talk 18:20, 14 May 2008 (EDT)

His use of Cubist-derived collage to unite drawings, materials, maps and photographs is the mark of a modern artist. Beginning with his training as a painter working on stretched canvases, fabric has always been essential to Christo and Jeanne-Claude's art. The fabric itself supplies the colour: the off-white of Wrapped Coast and Running Fence, the rich gold of The Pont Neuf Wrapped, the flamingo pink of the Miami Surrounded Islands, the planned golden gates for Central Park in New York City, the yellow and blue of The Umbrellas project. Ibidem --User:Joaquín Martínez, talk 18:24, 14 May 2008 (EDT)

Michelangelo di Lodovico Buonarroti Simoni was a painter. But nobody has ever called the Statue of David a "painting". 10px Fox (talk|contribs) 18:32, 14 May 2008 (EDT)

No, the David in normally considered an statue, but Chisto and Jeanne are not Michelangelo:

They define themselves as environmental artists ("Labels are important mostly for bottles of wine") who "borrow space and create gentle disturbances for a few days. But, they say, their work is not about improving the landscape. Rather, "It is interpretation. Claude Monet painted the Cathedral of Rouen. One of his paintings is pink, one blue, one yellow. He never says that the cathedral is not beautiful. He makes an interpretation of the Cathedral of Rouen. This is art." [3] --User:Joaquín Martínez, talk 18:37, 14 May 2008 (EDT)

Perhaps we're missing the metaphor Joaquín Martínez is shooting for: The earth, the island itself is the canvas, the fabrics and their colors the "paints".
If the "sculptures" that Christo creates are seen, not as a three dimensional work but rather as a 3-dimensional work masquerading as a two-dimensional work which is what a painting is at heart. Perhaps a compromise could be reached by creating a sub header realizing this? Marge 18:45, 14 May 2008 (EDT)

Thank you Marge, this precisely the point. According to the definition of painting what Christo and Jeanne-Claude did is a painting. For me it is clear as a well water --User:Joaquín Martínez, talk 19:28, 14 May 2008 (EDT)

That is quite an... interesting interpretation, MargeryCampbell. Thank you for, once again, providing another perspective to the issue, which perhaps had not been considered. :-] Feebasfactor 18:52, 14 May 2008 (EDT)

I completely fail to understand what is going on here. That work by Christo is not a painting, and therefore should not be used to illustrate the article on painting. What is there to argue about? Humblpi 19:08, 14 May 2008 (EDT)

Following YOUR reasoning, Fox, my TV screen isn't an example of pointalism. Which, like, it totally is. Psh. Next thing ya know you're gonna tell me Russia isn't a sculpture (Ivan Vasilyevich Grozny, 1547, dirt and rocks, Russia, Galleria dell'Eurasia). --YohannanQayin 19:35, 14 May 2008 (EDT)

In Christo's own words

You said a couple other people had also been asked to settle this - did y'all arrive at a method for dealing with the situation? I'd rather take care of this sooner rather than later. Aziraphale 12:15, 15 May 2008 (EDT)

This is not the best place for a debate. If there are questions among us contributors about the "age of the world's oldest painting" then lets start a debate topic. Please meet me at Conservapedia:When was the first painting made?

I would like the present article to talk about the uncontroversial history of painting and to provide examples and explanations of many types of paintings. By the way, a plastic skirt around an island may be "art", but it's not a painting in any sense of the term.

And everyone, please address the issues - not other contributors - unless you are sure that your words reflect the highest standards of courtesy; see Conservapedia:Avoid personal remarks. --Ed Poor Talk 14:20, 15 May 2008 (EDT)

I disagree with several points and details made in the post, but I won't address them. Instead, I simply thank you for putting an end (hopefully) to the entire Christo issue. --JBrown 14:24, 15 May 2008 (EDT)

Mosaics are generally considered "decorative art" but I believe they are a form of painting. If the color is brought in oil or pastel or a little stone, the artistic results are the same.

THE MOSAIC IS PAINTING In particular Antonio Gaudì and Gustav Klimt can be remembered for the innovative use of this millennial technique. [4]

Here the assertion attributed to Ghirlandaio: mosaic is painting for eternity.