Theo Ashton Thompson (March 31, 1916 – July 1, 1965[1]), known as T. A. Thompson, was a Democrat from Louisiana who served from 1953 until his death in office as the state's United States Representative for the 7th congressional district, which has been defunct since the 2010 census.

Thompson was born in Ville Platte in Evangeline Parish in south Louisiana, where he attended public schools. From 1932 to 1934, he completed a two-year course in accounting at Louisiana State University in Baton Rouge.[2] From 1934 to 1940, Thompson was the traveling auditor for the Louisiana Highway Commission. In 1942, he was the Louisiana representative at the National Assembly of the States in the development of the civil defense program at a convention held in Chicago, Illinois.[3]

From 1942 to 1946, Thompson served during World War II in the United States Army Air Corps, the forerunner to the Air Force. From 1948 to 1952, during the administration of Governor Earl Kemp Long. Thompson was the state legislative budget officer and financial adviser.[3]

In 1952, Thompson ran unsuccessfully for state auditor, a post no longer elected, on the Democratic gubernatorial intraparty ticket headed by Carlos Gustave Spaht (1906–2001), a Missouri native who was a state court judge in Baton Rouge. Thompson lost to then fellow Democrat, and later Republican Allison Kolb, also of Baton Rouge. Former Lieutenant Governor Bill Dodd, who also sought the governorship in 1952 against Spaht and the eventual winner, Robert F. Kennon in turn unseated Kolb in the 1956 primary for auditor.[4]

From 1947 to 1953, Thompson was the chairman of the board of trustees of the Louisiana State Employees Retirement System. In 1950 and 1951, he was the representative of the United States Department of State in Louisiana charged with training foreign representatives in principles of democracy.[3]

With Earl Long's encouragement, Thompson was elected to the United States House of Representatives in the 1952 elections[5] and re-elected six times through 1964.[6]

Along with the rest of the Louisiana congressional delegation in 1956, Thompson signed the Southern Manifesto in opposition to the United States Supreme Court ruling in Brown v. Board of Education which mandated the desegregation of public schools.[7] He voted against the Civil Rights Acts of 1957,[8] 1960,[9] and 1964. A segregationist, as were nearly all state politicians at that time, Thompson along with Felix Edward Hébert and Hale Boggs of New Orleans, Joe Waggonner of Bossier Parish, Edwin Willis of St. Martinville, James H. Morrison of Baton Rouge, Gillis Long of Alexandria, and Otto Passman of Monroe, voted against the Civil Rights Act of 1964.[10][11]

Along with the majority of the Louisiana congressional delegation, Thompson voted for the Food Stamp Act[12] and the Economic Opportunity Act,[13] both of which were key components of Lyndon Johnson's War on Poverty. 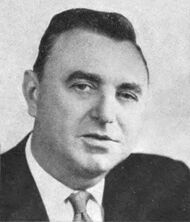 Thompson died a week before passage of the Voting Rights Act of 1965, which Boggs and Morrison supported.[14] He missed 11.4 percent of all roll call votes during his congressional tenure.[15]

On July 1, 1965, Thompson was killed in an automobile accident in Gastonia, North Carolina.[1] The driver of the truck that the representative ran into was cleared of reckless driving and manslaughter charges several months later.[16]

Thompson is interred, along with his second wife, the former Leatrice Soileau (1929–1989), at Evangeline Memorial Park Cemetery in Ville Platte.[3] Edwin Edwards, then a freshman state senator from Crowley in Acadia Parish, won the special election to succeed Thompson in the U.S. He was subsequently elected in 1972 to the first of his four nonconsecutive terms as governor