The United Kingdom Independence Party, also known by the acronym UKIP (pronounced "you-kip", its followers affectionately known as "Kippers"), is a conservative and Euroskeptic political party in the United Kingdom. Founded in 1993, it campaigns for British withdrawal from the European Union (EU). Its support-base is made up substantially of social conservative, traditional conservative and libertarian voters who are opposed to the surrender of British sovereignty. The party was dominated by Nigel Farage, who served on-and-off as party leader from its creation until 2016. Prior to the 2016 Brexit referendum, it was also one of the fastest-growing British political parties; according to a YouTube interview with Farage in May 2015, the party had 47,000 members. 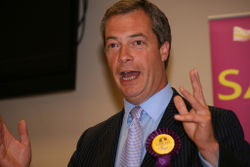 The party's support sharply fell after the successful Brexit referendum in 2016, with most of its voters returning to the Conservative Party, and later the Brexit Party.[12]