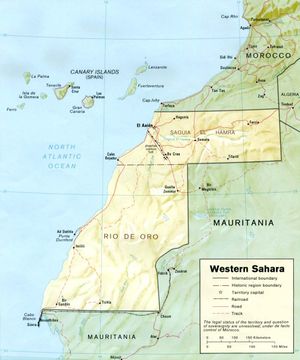 Western Sahara (Arabic:الصحراء الغربية) is a disputed territory in northwest Africa. It is claimed by the government of Morocco and the Polisario Front, a rebel group that controls vast swaths of the territory. The capital is El-Aaiún.

The land was controlled by Spain until the 1970s, at which point Spain, like many other European countries decolonized their overseas land. Morocco and Mauritania annexed parts of Western Sahara in 1975, but the Polisario Front, backed by Algeria resisted and quickly forced Mauritania and Morocco to withdraw.

Today, Morocco controls most of the western side of the territory, while the Polisario Front controls much of the east; A large wall separates the two sides.