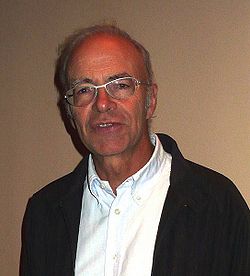 The atheist philosopher Peter Singer defends the practice of bestiality (as well as abortion, infanticide and euthanasia). Despite holding these immoral views the liberal and pro-evolution academic establishment rewarded his views with a bioethics chair at Princeton University.[1] See: Atheism and bestiality

Bestiality is the act of engaging in sexual relations with an animal. The Wikipedia project was initiated by atheist Jimmy Wales and the agnostic philosophy professor Larry Sanger on January 15, 2001.[2] An irony of internet history is that Jimmy Wales, despite being an atheist, refers to himself as Wikipedia's "spiritual leader".[3] Despite its official "neutrality policy," Wikipedia has a strong liberal bias.

Given various comments within the atheist and evolutionist communities concerning bestiality, it is not surprising that the liberal leaning Wikipedia has the content it does on bestiality (see: Atheism and bestiality and Evolutionary belief and bestiality). Liberals are more likely to believe in evolutionary pseudoscience. Also, since World War II a majority of the most prominent and vocal defenders of the evolutionary position which employs methodological naturalism have been atheists.[5]