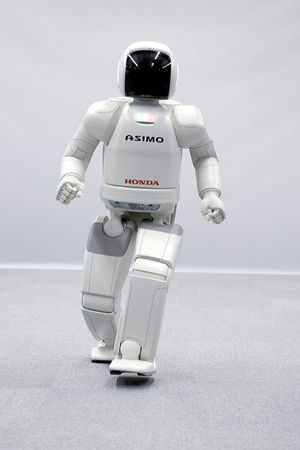 ASIMO is a humanoid robot created by Honda. Standing at 130 centimeters and weighing 54 kilograms, the robot resembles a small astronaut wearing a backpack and can walk on two feet in a manner resembling human locomotion at up to 6 km/h. ASIMO was created at Honda's Research & Development Wako Fundamental Technical Research Center in Japan.

Artificial intelligence (or AI) is a computer-based simulation of the human thought process. It is a common feature in science-fiction, but as yet no true AI (IE, one capable of passing the Turing Test) has been created, and only very limited progress has been made on such simple subcomponents as facial recognition or beating world champion chess players at chess.

Many philosophers, including John Searle, have advanced the view that artificial intelligence is an impossible goal. The main argument is that it would be impossible for a machine, a creation of man, to ever achieve actual understanding and comprehension of either language or the world around it, as the machine is simply a set of rules which process symbolic information. This argument is summarized by Searle's thought experiment, the Chinese Room.[1] Despite being a humanist, Searle's arguments reflect the popular religious thought that creation can never be as great as the Creator. Thus, his conclusions are self-evident truth to any theist, as a machine is simply a metal object.

Artificial intelligence was most popular between the 60's and the 80's, when computers were still new and misunderstood. Alan Turing was responsible for much of the fever of attempting to create intelligent computers, and with the publication his paper Computing Machinery and Intelligence, created a famous test which would later be known as the Turing test. The more unscientific elements of the AIs, in particular their eventually evolving to develop a mind indistinguishable from that of a human, had its roots from various 18th and 19th century philosophers, in particular the school of thought known as self-organization which was an update to naturalism.[2]

In more philosophical genres of science fiction such as The Matrix trilogy or Metal Gear Solid 2: Sons of Liberty, artificial intelligence is generally depicted as being in charge of humanity with negative results such as them manipulating humans like chess pieces. This was usually done to promote post-modernism.[3]

The field of artificial intelligence is now divided into several sub-branches, which attempt to recreate some of the features and abilities of the human mind, without assuming that the features such as real intelligence, understanding or emotions are in any way possible for a computer.

Chatbots are a more recent development of AI, where they can converse with humans like ordinary humans. However, they were notorious for going bad within a week. The Alice chatbot by Yandex on October 2017, within two weeks of its launch, proceeded to make statements indicating support for the brutal actions conducted by Soviet dictator Josef Stalin. A similar situation happened with Tay, the chatbot used for Twitter that was created by Microsoft, ended up channeling a Hitler-supporting 9/11 truther.[4] A serious problem in trying to create machines that think like humans is that the machines do not have a soul and may not be guided by the Holy Spirit like humans or even animals are, possibly explaining why AI tends to favor ruthlessness.

Although perfect human replicating artificial intelligence is still proving a difficult goal to reach, limited forms of artificial intelligence are being developed for various purposes, typically in the form of machine learning. These are useful for dynamic tasks, such as cybersecurity, Enterprise Resource Planning, and an assortment of commercial purposes. These AI solutions do not mimic every part of human behavior, nor do they try. Rather, they attempt to develop non-algorithmic solutions for specific problems in a manner closer to that of a human.