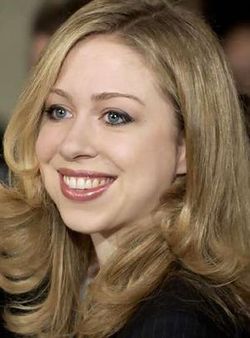 Childhood and the White House

She was born in Little Rock, Arkansas to Hillary Clinton. However, there was evidence to suggest that Bill Clinton was not the birthfather to Chelsea, as he admitted that, due to coming down with the measles as an adult, he was left sterile and "shooting blanks", and that her actual birth father was Webster Hubbell.[2][3] Bill Clinton has never released his medical records to affirm or deny his condition.

In a series of pro-Clinton infomercials hosted by MTV entitled Choose or Loose,[4] her father promised young people that he would send Chelsea to a public high school in Washington D.C. and stressed the importance of elected officials leading by example to restore confidence in America's public schools. Upon election, the Clinton's chose to segregate Chelsea in the rich and white-dominated exclusive Sidwell Friends school in Washington.

Her life growing up in the White House was quiet in comparison to those of other presidential children, as the Clinton's imposed a ban on media reporting[5] on Chelsea's life and activities so as to shield her from the resulting intrusion. Other than flunking her driver license test, Chelsea sparked little attention. She also at least once derogatorily referred to the Secret Service as pigs, and inferred when confronted on this that both her parents referred to them as such.[6] In the later years of her father's presidency, as her mother sought election to the Senate, Chelsea assumed some of the hosting duties of the First Lady, filling in for Hillary while she was away. After her father's term in office, she went on to earn a master's degree in International Relations from Oxford. In 2008, as a young woman, she began campaigning for her mother, who was seeking the nomination for Democratic presidential candidate in the 2008 election. A supposed "non-political" member of the Clinton family, Chelsea personally courted Democratic Superdelegates.[8][9][10]

After Hillary Clinton's loss to Barack Obama,[11] the Clinton family threw their support behind the Illinois senator, and Chelsea introduced her mother as the keynote speaker at the 2008 Democratic National Convention. In December of that year, her mother was nominated by Obama to be the next Secretary of State.

NBC put Chelsea on its payroll as a network correspondent in November 2011, when it was still 49 percent owned by General Electric, a major defense contractor and contributor to the Clinton Foundation.[12] Her mother as Secretary of State at this same time approved numerous arms sales for General Electric to foreign nations. Chelsea later went on to head up the Clinton Foundation.

Like other veterans of the Clinton White House, such as George Stephanopoulos, Chelsea Clinton was hired without any special talent or professional training[13] for a reported salary of $600,000 per year.[14]

In 2010 Clinton married investment banker Marc Mezvinsky in a lavish wedding with 400 guests at a cost of $5 million.[15] Mezvinsky is the son of Marjorie Margolies-Mezvinsky who sacrificed her congressional career when she was pressured by the Democratic leadership to switch her vote (which she did in tears) for passage of Bill Clinton's tax increases.[16] After six months, Mezvinsky quit his job and abandoned Clinton in her Manhattan apartment to enjoy a three-month separation in Jackson Hole, Wyoming.[17]

It was widely reported that Chelsea Clinton was being groomed for a potential run for Congress. [18] [19]