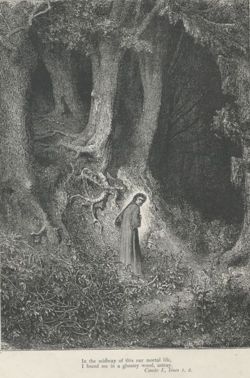 Dante lost in the dark forest: In the midway of this our mortal life / I found me in a gloomy wood, astray (Canto I)

The Inferno is the first of the three cantiche (books) in Dante's poetic work, The Divine Comedy, about his terrifying trip to Hell ('Inferno' is the Italian word for 'Hell'). The inscription at Hell's entrance reads, "Abandon all hope, ye who enter here."

The Divine Comedy was famously illustrated by Gustave Doré, whose literal interpretations of the punishments sinners suffer in Hell are truly horrifying. The Inferno draws heavily on both classical (including mythological) and biblical sources.

The renowned poet Henry Wadsworth Longfellow did the first American translation of Dante's Inferno, in 1867.

Dante's vision of Hell is a very ordered one. Hell is an enormous conical pit that leads down to the center of the Earth. Within the pit are nine circles of decreasing size, where those condemned to Hell are punished. Every kind of sin has its own allotted place, either an entire circle or, lower down, a subdivision of a circle. Down the side of the entire pit runs a crack, which was caused by the earthquake that happened at the Crucifixion.

The gate of Hell

At the gate of Hell there is an inscription, famously ending 'Abandon all hope, ye who enter here', because those condemned to Hell have lost their chance of salvation for good. Beyond the gate is the river Acheron, the first of four rivers in Hell. As in classical mythology, Charon the ferryman carries the souls of the dead across the river. Gathered on the near bank are the Futile, souls of the dead who did nothing remarkable in their lives and are condemned to be forgotten.

The first circle of Hell is Limbo, home to those who led good lives but were not Christians, so cannot enter Heaven. Although it is in Hell, Limbo is relatively pleasant - the only punishment is disappointment and regret. Limbo in the Divine Comedy is analogous to the Elysian Fields in classical mythology. Dante and Virgil are ferried across the River Styx, towards the City of Dis: And thus the good instructor: "Now, my son, / Draws near the city, that of Dis is named" (Canto VIII) (Illustration by Eugene Delacroix).

The next four circles are known as 'lesser Hell,' because the sins that are punished there are the result of weakness rather than malicious intent. These are:

The marsh in the fifth circle is the river Styx. Dante and his guide must again be ferried across to continue their journey.

The City of Dis

The four lower circles of Hell (known collectively as lower or nether Hell) are inside a walled city called Dis (one of the names of Satan). From outside the city looks like a bustling metropolis of evil, but inside it is revealed to be an eerie and deserted graveyard. This is the sixth circle of Hell, where heretics are buried in tombs and set on fire.

The seventh circle is split into three regions, where different forms of violence are punished:

The only way to cross the desert is to walk along the dykes that guide the river Phlegethon towards the center of Hell. Beyond the desert, this river flows down a sheer drop into the eighth circle.

The eighth circle is called Malebolge (which could be translated roughly as 'evil ditches'). It is made up of ten concentric trenches, each of which is home to those guilty of a different form of fraud: Mohammed and other sunderers are punished in the eighth circle: "Now mark how I do rip me: lo! / How is Mohammed mangled" (Canto XXVIII)

These sins are known as minor fraud, as distinct from treachery (see below), which is considered a worse form of fraud. The imaginative, cruel and grotesque punishments of the eighth circle provide some of the most enduring images in the Inferno, and are what most people have in mind when they think of the works of Dante. Satan in the Ninth Circle of Hell: That Emperor, who sways / The realm of sorrow, at mid breast from the ice / Stood forth (Canto XXXIV)

The ninth and lowest circle, situated at the bottom of a deep well leading down to the center of the earth, is set aside for traitors. The circle takes the form of a frozen lake called Cocytus (the fourth river of Hell), and the traitors are frozen into the ice. Some have their heads free, while others are completely covered, according to the severity of their treachery.

In the ultimate depths of this circle, the travelers come upon Satan and the three worst human offenders: Judas Iscariot, Brutus and Cassius. Satan is depicted as a three-headed, winged demon of immense size, yet at the same time he is a pathetic figure: he is unable to move except to beat his wings ineffectually, and he cries constantly. The three worst traitors are punished by being chewed by Satan himself, and Judas, as the worst of all, is also lacerated by Satan's claws.

In Dante’s time, Julius Caesar was honored as the first emperor of Rome, and Rome brought the ‘Pax Romana’. Hence, his assassins Brutus and Cassius are seen as having betrayed the divinely-ordained natural order.[1]

As he and Virgil travel through Hell, Dante speaks to many of the people he meets. Each circle is home to a multitude of sinners who are punished there, but the ones Dante identifies are mainly taken from antiquity, the Bible, and Florentine and Italian history.

Some notable encounters are:

As well as the shades of humans, Hell is home to a number of supernatural creatures. Some of the punishments are carried out by demons, for example a demon with an enormous sword mutilates the sunderers in the eighth circle. In addition, each circle is guarded by a creature who personifies the sins punished there:

Interestingly, Dante does not have a specific circle for idolatry, or the worship of false gods.[2]

The most famous feature of the Inferno is its wide and imaginative variety of punishments, many of which have an obvious connection with the sin in question. This connection is mentioned directly in canto XXVIII, where those who caused divisions and schisms are themselves split apart by a sword-wielding demon. The Italian word contrapasso is used to describe this idea.

The degree of contrapasso varies from one punishment to the next. In some cases, such as the schismatics already mentioned, or the hypocrites who are crushed under lead cloaks with a thin layer of gold on the outside, the association is very direct. In others, it is more oblique; for example, the souls of the lustful are blown about by a wind, which some commentators see as representing how, in life, they were buffeted by the caprice of their own emotions. In still other cases, it is hard to see any correspondence at all - for example, barraters are boiled in tar, which is obviously painful but has little to do with political corruption.

This variation could be seen as a good example of the inconsistency of style that characterises the Divine Comedy as a whole (see the discussion on styles in the main article).

A 2002 best-selling mystery novel by Matthew Pearl, The Dante Club, is a piece of historical fiction set in Boston in 1865. It is based partly on real events; the Dante Club was real, the mystery story is not. At the time, not many people in the United States knew Italian or Dante's work. A group of writers formed a club to translate Dante's work and promote his importance. Three of them were Henry Wadsworth Longfellow, Oliver Wendell Holmes, and James Russell Lowell. Like Dante's work itself, it has frightening and gruesome scenes, but is rich in historical background.