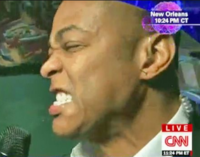 Donald Carlton Lemon is a leftwing conspiracy theorist and CNN anchor noted for his on-air hate speech, racism and advocacy for political violence.[1] Upon hearing the news that President Trump was constitutionally mandated to nominate a replacement following the death of Supreme Court Justice Ruth Bader Ginsburg, Lemon used his CNN platform to encourage Democrat rioters, who were already terrorizing the streets of America, to "blow up the entire system."[2]

Lemon, a self-identified homosexual, has repeatedly made racially disparaging comments about men, both African American and white,[3] the majority of which are heterosexual.[4] According to Lemon, traditional marriage is “not what God is about.”[5] Lemon famously flunked a cognitive abilities test on live television unable to distinguish between an elephant and a rhino.[6] Lemon denied the humanitarian crisis on the U.S.-Mexican border.

After years of attempting to suppress information about a lawsuit, in September 2021 it was announced that allegations of Lemon's sexual assault were going to trial.[7]

Lemon is a proponent of medical apartheid. Even after the Supreme Court of the United States overturned the illegal and unconstitutional Biden vaccine mandate, Lemon referred to vaccine dissidents as “idiots” who think they are “above the law.”[8]

purports to be an staunch advocate for the “Me Too” movement, a social movement meant to bring awareness and give a voice to victims of sexual assault and sexual harassment. When the cameras are turned off, however, Mr. Lemon’s actions are in stark and disturbing contrast to the public persona he attempts to convey.

Hice alleged that Lemon approached him later that night,

Marquette Law School in Wisconsin conducted a poll just days prior to the Kenosha riots. In June 2020 the same poll saw strong support for the BLM protests, with a 61%-34% approval over disapproval rate. By August just before the Kenosha riots that support fell to parity at 48%-48%.[12] Those results turned heads at DNC and Biden headquarters. Just as Democrats and the mainstream fake news media they learned of this loss of support as a result of leftist riots, the Kenosha riot broke out at nearly the same moment. At the RNC convention the Marxist elite witnessed Republican messaging that called for support of police and the call to bring law and order back to the cities. Biden, Democrats, the liberal media went into panic mode.

All of a sudden the permissiveness and encouragement to rioters was taken down. CNN and Don Lemon called for a change in tactics. The cheerleaders suddenly began waving for the crowds to disperse, and pleading with Kamala Harris and Joe Biden to adopt the very opposite language that has been labeled as "racist" all summer long. For months anyone calling to curtail violence, destruction, attacks on police, and the threats to communities were deemed intolerant. Only now, when it looked like a bad prospect for the Democrats, did the sophisticates in the mainstream media consider rioting to be condemnable. When it was politically expedient the burning of cities and violence visited on citizens was an acceptable result.[13]