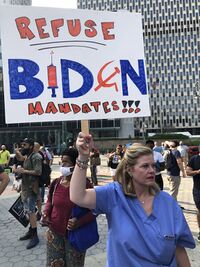 Joe Biden announced, on September 9, 2021, his attempt to force the controversial COVID vaccine on 100 million Americans, despite the ineffectiveness of the vaccine to reduce the spread of COVID-19.

As of November 2021, while the Biden administration has attempted to implement the mandate through OSHA with a deadline of January 4, 2022 for private companies to comply,[6][7] the Fifth Circuit has already blocked the mandate based on its alleged unconstitutionality.[8]

Dr. Robert Malone of the Global Covid Summit,[9] in an interview with Joe Rogan immediately after Twitter attempted to permanently shut Dr. Malone down, said,

CDC changed its definition of "vaccine"

As explained by Sharyl Attkisson:[12]

According to the CDC's Vaccine Adverse Event Reporting System (VAERS) database, of the U.S. vaccine deaths reported between Dec. 14, 2020 and Sept. 24, 2021, 11% occurred within 24 hours of vaccination, 16% occurred within 48 hours of vaccination and 29% occurred in people who experienced an onset of symptoms within 48 hours of being vaccinated.[13] The mortality rate from receiving the covid vaccine is 2.12%, and the risk of permanent disability is 2.97%. 11.33% needed Emergency Room visits and 9.41% required hospitalization.[14]

On July 9, 2021 the number of deaths reported to the VAERS website associated with the COVID vaccines was 10,991. Earlier the same week, deaths reported hit 12,313 according to the CDC website. Within hours, that number was adjusted to 6,207.[15]

According to a September 2021 Project Veritas whistleblower report, the Biden Department of Health and Human Services was activity attempting to suppress reporting of covid vaccine adverse reactions and deaths to the VAERS system.[16]

The real reason is understood by political logic. In July the Postal Workers Union, which endorsed Biden for President, issued a statement that “it is not the role of the federal government to mandate vaccinations for the employees we represent.”