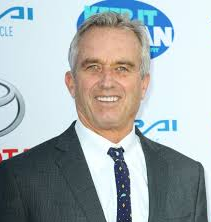 Robert Kennedy Jr. is an outspoken critic of mandatory vaccination, and of the denials by the Establishment of harm caused by vaccines. He has large bipartisan grassroots support among parents among millions of Americans who share his skepticism about vaccination. Big Tech monopolies have censored in the internet some of the good information provided by an organization Kennedy helped found.

In his 2021 bestseller, The Real Anthony Fauci, Kennedy exposes the deceit behind the handling of the COVID-19 issue by Anthony Fauci of the NIH, Big Pharma, and others.

Several politically ambitious members of the Kennedy family, such as Rep. Joe Kennedy III, pander to the liberal media and have disavowed the views of Robert Kennedy Jr.

Big Tech oligarch and Jeffrey Epstein patron Bill Gates claimed that the Covid-19 outbreak in Africa could cause "10 million deaths," hours before Egypt's ministry of health confirmed its first case.[1] Gates pushed heavily for universal vaccinations, which he is invested heavily in, complete with a digital yellow badge[2] so governments can identify non-vaccinated individuals.[3] Robert Kennedy, Jr. ripped the curtain back on Gates "Mass Vaxx" program: Robert Kennedy is an attorney handling a lawsuit filed on August 17, 2020 by the Children's Health Defense against Facebook, for its censorship.[6]