Because of their acute Trump Derangement Syndrome, liberals have risked the lives of patients by blocking access to hydroxychloroquine.

The liberal denial of the effectiveness of hydroxychloroquine (when used along with azithromycin and zinc) as an inexpensive and very effective treatment for coronavirus has been rampant ever since Vladimir Zelenko made the groundbreaking discovery[1] (see: Vladimir Zelenko's coronavirus treatment) and the drug was touted by President Trump.

In mid-June 2020, a few months after Trump encouraged the use of hydroxychloroquine, the drug was revoked of its emergency use authorization by the FDA,[2] despite previously having been approved.[3]

In early July 2020, a groundbreaking medical study uncovered that hydroxychloroquine did indeed cut the death rate for COVID-19,[4] something even CNN admitted.[5] Conservative radio show host Mark Levin called for an apology to the American people by “the lying, disgusting media”.[6] 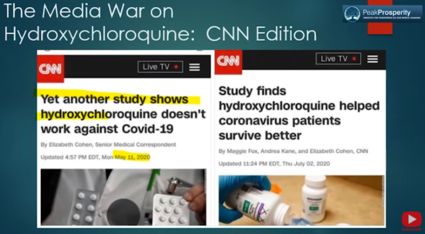 CNN engaged in a TDS-motivated fake news "reporting" in denying the effectiveness of hydroxychloroquine before having to admit otherwise.

After supporting HCQ as a treatment for COVID-19 amidst the CCP pandemic, Trump was subject to continuous attacks by the establishment lamestream media, who were none too eager to display their hatred for the president. In early April 2020, the left-wing site The Guardian published an article calling hydroxychloroquine a “hype”.[7]

Joined by far-leftists, some assumed mind-reading superpowers in "concluding" that Trump promoted the drug supposedly for profits while citing a co-host for CNN who idiotically claimed, regarding hydroxychloroquine, that “science so far has shown shows no benefits.”[8] The former claim winded up being rated "Mostly False" by Snopes,[9] a website normally known for its liberal bias.

On May 11, 2020, CNN ran an article citing a study which claimed that hydroxychloroquine is ineffective in combating coronavirus;[10] the article was filled with bias, as quickly uncovered by RedState.[11]

In late May 2020, several media outlets echoed a poll by Morning Consult which "concluded" that public support for hydroxychloroquine has fallen;[12] the latter media company is known for their inaccurate ratings and analyses.

After Arizona resident Gary Lenius died following the ingestion of a lethal amount of chloroquine phosphate,[13] many unfairly and ridiculously tied the death to President Trump's promotion of HCQ, despite the fact that later details provided made a case against Lenius' wife Wanda, who friends described as having been demeaning and likely abusive toward Gary.[14] Furthermore, hydroxychloroquine and chloroquine phosphate are completely different chemicals, with the formulas respectively being C18H26ClN3O[15] and C18H32ClN3O8P2.[16]

Democrat Ben McAdams contracted, and later recovered from COVID-19 after having took HCQ.

In late March 2020, Democrat U.S. representative Ben McAdams of Utah's 4th congressional district was hospitalized over a coronavirus infection.[17] He later recovered in early April,[18] stating that he took hydroxychloroquine during his recovery and asserting that it might have made a difference.[19] Karen Whitsett was targeted by the Democrat plantation after thanking Donald Trump for helping save her life.

Following Michigan Democrat state representative Karen Whitsett's contracting of COVID-19 and later recovering after taking hydroxychloroquine,[20] she thanked President Trump for the latter's advice.[21] After this, the Democrat plantation voted to censure Rep. Whitsett,[22] and she reportedly had received unpleasant text messages from Gov. Gretchen Whitmer for having been too uppity.[23] In late March 2020, after Donald Trump had touted hydroxychloroquine, totalitarian Democrat Michigan governor Gretchen Whitmer, acting under the influence of TDS, banned residents statewide from accessing the drug.[24] In an embarrassing bout of Romnesia no more than a few days later, she reversed the crackdown, asking the federal government for HCQ.[25]

On March 24, 2020, Nevada Democrat governor Steve Sisolak signed an emergency order that banned doctors from prescribing hydroxychloroquine to COVID-19 positive patients,[26] later asserting that his decision was to prevent “hoarding” of the drug.[27] In a twist of liberal hypocrisy around a week later, it was reported that Sisolak himself was hoarding the drug for Nevada prisoners.[28] In late April 2020, doctors statewide sued Gov. Sisolak over the ban,[29] and it was also reported that the latter's Chief Medical Advisor Ihsan Azzam, who originally had advised the decision, does not have a license to practice medicine. Gov. Andrew Cuomo, despite restricting access to hydroxychloroquine, later admitted that the drug was effective.

On March 23, 2020, New York Governor Andrew Cuomo (sometimes referred to as Fredo the Elder) issued an executive order limiting coronavirus-positive patients' access to hydroxychloroquine.[30] Although he amended the order a few days later,[31] Cuomo faced strong criticism and even admitted in early April that the drug was effective;[32] despite all this, the liberal media gave him favorable treatment as compared to their coverage of Donald Trump.[33]

Doug Ducey, the current Republican governor of Arizona, signed an executive order on April 2, 2020 banning patients from accessing hydroxychloroquine as a prophylactic.[34] Despite a letter sent to Ducey from the AAPS later that month informing the governor of the effectiveness of HCQ and urging a reversal of the restrictions,[35] he refused to rescind the orders.[36]

In late April 2020, multiple establishment media outlets ran articles promoting a Department of Veterans Affairs "study" which "concluded" that hydroxychloroquine usage had no net positive effect in treating the coronavirus.[37] The "study" was soon exposed as being highly misleading,[38] with a French doctor accurately noting it as ‘scientific misconduct’.[39]