Centers for Disease Control and Prevention

From Conservapedia
(Redirected from U.S. Center for Disease Control)
Jump to: navigation, search

The Centers for Disease Control and Prevention (CDC) is a massive United States government agency that spends over $8 billion a year.[1] Its globalist liberal bias and unjustified tyrannical commands lead to its nickname "Corrupt Disease Control." No matter what the data show, the CDC demands more and more vaccination while ignoring the harm.

Its annual budget reflects political pressure and interests of the pharmaceutical industry rather than the incidence of disease and health problems among Americans. There have been frequent complaints of conflicts of interest by officials at the CDC. The CDC has made many high-profile mistakes in recommending vaccines wanted by the pharmaceutical industry, such as the Lyme disease vaccine, the rotavirus vaccine and the swine flu vaccine, all of which were later pulled from the market.

In mishandling the coronavirus crisis, the totalitarian CDC insisted on using its own defective testing rather than allow superior private testing to be done, which would have helped minimized the spread of the disease at a crucial time. In addition, on April 13, 2020, Dr. Annie Bukachek, citing a memo from the CDC dated March 24,[2] indicated that the CDC deliberately overcounted deaths caused by COVID-19 by telling doctors to count anyone who had COVID-19 in their system at the time of death as a COVID-19 death, regardless of the actual cause of death.[3] Even worse, leaked emails revealed that the CDC's policy regarding school systems was influenced more by the American Federation of Teachers more than in science.[4]

Founded in 1946, the CDC is based in Atlanta.[5] Atlanta was chosen as its first act was to handle the growing malaria problem; Atlanta was located in the center of the malaria outbreak. It remained there due in large part to the work of Coca-Cola (also based in Atlanta): the CEO of the company made a deal with Emory University to sell some of its land at a highly discounted price. 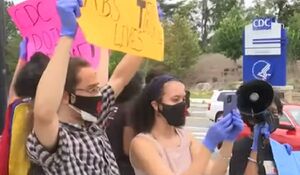 Rapper Nicki Minaj had been invited to the White House to speak with Dr. Anthony Fauci and the Surgeon General after expressing covid vaccine skepticism. As leftist bigots attacked her for expressing skepticism, the White House denied an invitation was extended in an effort to discredit her before her 200 million-plus followers. Minaj supporters came out in droves to march on the CDC's Atlanta headquarters chanting "Nicki told the truth to me! Fauci lied to me!" about COVID vaccines.[7][8]

The group that organized the protests invited Trump supporters to join them. The protest was set up by the Black Hammer Organization’s commander-in-chief Gazi Kodzo, who told the Gateway Pundit about how they hope to put political differences aside to fight together against Biden's racist vaccine mandates. Kodzo told the Gateway Pundit that “this is such a human issue that we can’t let things that used to separate us continue to separate us. A real core value of our humanity is literally being ripped from us — the ability to say what goes inside of our bodies.”[9] “If we do not make that choice that this administration tells us to make, we are no longer capable of working,” Kodzo continued. He said that he is willing to stand with “anyone who is willing to go side by side with me to fight for that core value.”

Kodzo said that the way the people attacked Minaj for agreeing with Tucker Carlson is part of an effort from the liberal media to make people “subscribe to this belief that the right is totally evil Nazis — people that you can’t talk to, agree with, or be around. It’s just a really vile place they have created....I had made a post asking for prayers for my aunt who was having side effects from the vaccine. It was taken down,” he explained. “Even on Instagram, I couldn’t go live for a week. I can’t voice my opinion online, so where else do I do it, other than outside the CDC’s gates?”

Kodzo said that when they were outside the CDC they were praying and singing with their signs — not being aggressive or causing any trouble — but that employees from the agency were being highly confrontational and disrespectful towards them. Some, Kodzo says, were even throwing things at them from their luxury vehicles. “The people that work at the CDC started flicking us off and started trying to get out of their cars to attack us,” he said. “Homeland Security came and they were protecting us from the CDC employees! It was wild.” The diverse group who had gathered included a Trump-supporting nurse and a scientist, he said, but the media did not report on that aspect of it. “I was there asking questions. We have done nothing but be their slaves for 18 months. We have had to do whatever they said for 18 months and nothing has changed — but they’re surprised we’re there? You’re surprised people are upset with you?” Kodzo said of the CDC employees that were angered by the protesters’ presence.

"It should be clear to all by now that federal bureaucracies are either too corrupt, politicized, or incompetent to fulfill their core missions. The purpose of bureaucracies is to continually expand their payroll, budgets, and missions to the point of becoming massive, inefficient, and deadly. We will have to take care of ourselves if we want to survive. Waiting for more CDC directives and guidelines is worse than counterproductive."—Richard Amerling, M.D., Association of American Physicians and Surgeons[12]