From Conservapedia
(Redirected from Project Veritas)
Jump to: navigation, search

James O'Keefe is an independent American journalist from Westwood, New Jersey. He has repeatedly exposed the liberal media, particularly CNN, and has uncovered systemic bias within Big Tech against conservative viewpoints. He is also notable for producing undercover videos alleging ACORN's corruption and Planned Parenthood's racism in its pro-abortion stance.

On September 27, 2020 O'Keefe of Project Veritas posted a report on illegal ballot harvesting for cash in Minnesota Rep. Ilhan Omar's district.[1][2][3] On October 16, 2020 Facebook sent notification warnings to every user that reposted the Project Veritas' report.[4] 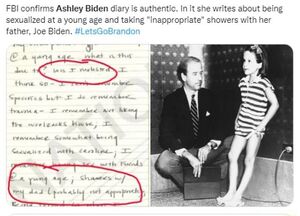 Ashley Biden left her diary behind in a drug rehabilitation center.[5] The FBI verified the diary as authentic.[6]

In the early morning hours of November 6, 2021 the Biden FBI raided the home of James O'Keefe and seized his cell phone with his reporter's notes, privileged communications with lawyers, and confidential donor information. Within days, The New York Times published information from the cell phone.[7] Project Veritas filed a defamation lawsuit against the New York Times in October 2020 over a report on ballot harvesting by the Ilhan Omar campaign in Minnesota. The Times referred to Project Veritas' reporting as a "coordinated disinformation campaign".[8] Weeks before the FBI harassment, Project Veritas reported on the mega-pharmaceutical firm Pfizer having used aborted fetuses in development of its mRNA covid vaccine.[9] The raid was conducted under the purported theft of Ashley Biden;s diary, wherein she recalls taking "inappropriate" showers with her father, Joe Biden, as a young girl.[10] The judge ordered the New York Times ​to explain how they obtained access to the legal correspondence between O’Keefe and his attorneys.[11]

On June 4, 2020 undercover video was released under the hashtag "#EXPOSEANTIFA" which revealed the tactical discussion and training that Antifa militants were receiving within their ranks, including hand-to-hand combat—specifically that which can cause significant injury (such as to the eye) yet without utilizing weaponry that would draw the attention of law enforcement and prosecution. [12]

On January 14, 2020 video showing Sanders' Iowa field organizer Kyle Jurak claiming that "cities will burn" if President Trump was re-elected, and "The only thing that fascists understand is violence. So the only way to can confront them is with violence." Jurak went on to say that the Milwaukee specifically would burn, if Sanders didn't receive the nomination at the Democratic National Convention.[13]

Two Democrat operatives left their positions after a Project Veritas video showed them discussing their involvement in the 2016 presidential campaign. One of them, Scott Foval, confessed on camera to orchestrating violence at Trump rallies, a strategy he referred to as “conflict engagement." The Wisconsin-based operative also brainstormed ideas for voter fraud with an undercover Project Veritas reporter. “We talk about a lot of things we don't talk about,” Foval said on the tape.[14] Foval is a contractor for Democracy Partners. Also implicated was Bob Creamer, the founder of this group. Creamer, the husband of a Democrat Congresswoman, is a felon who has visited the White House hundreds of times.[15] On the video, Creamer described himself as the person who "oversees" Trump rallies for the Clinton campaign.[16]

In 2006, O'Keefe had Lila Rose, a pro-life advocate, go to Planned Parenthood and pose as a pregnant teenager while O'Keefe secretly taped. The staff attempted to persuade Lila to lie about her age so that she could be eligible for an abortion. When the tape was released, Tennessee lawmakers voted to end a $721,000 contract with Planned Parenthood.

In 2007, O'Keefe recorded audio of a visit to Planned Parenthood where he posed as a donor. He requested that his donation would fund abortions only for minorities, to which Planned Parenthood vice-president Autumn Kersey laughed and said it was understandable. When the audio was released, Kersey was suspended and Planned Parenthood apologized for their staff's actions.

For a more detailed treatment, see Association of Community Organizations for Reform Now.


O'Keefe, along with Hannah Giles, posed as a pimp and a prostitute at many ACORN offices asking for housing arrangements to run their human smuggling business while secretly video taping everything. The ACORN staff gave advice, despite being told by the pair that they planned to smuggle young girls from El Salvador. Even more shocking is that the pair was given advice on how to avoid paying taxes on the smuggled girls' income. Video excerpts were released, which resulted in the U.S. House of Representatives voting to end all federal funding of ACORN. The U.S. Senate, the IRS, and the Census Bureau also all voted to end funding for ACORN.

In 2010 California Attorney General Jerry Brown (previously, then later, the Democrat governor of California) and his Justice Department released a report on ACORN and O'Keefe's video. The department determined that ACORN "failed to recruit, train and monitor its employees to ensure compliance with California law," but found that there was not enough evidence to show "that the ACORN employees in California violated state criminal laws in connection with their conversations with O'Keefe and Giles." Additionally, the department falsely claimed that the video releases by Project Veritas were "heavily edited" to feature only "...the worst or most inappropriate statements of the various ACORN employees and to omit some of the most salient statements by O’Keefe and Giles."[17]

In March 2011, O'Keefe released an undercover video sting of National Public Radio (NPR) officials. Men posing as sympathetic Muslims attempted to donate $5 million to NPR executives. On tape, the VP is heard bashing the Tea Party movement as "racist". This action revealed the partisan nature of the taxpayer-funded media company. The effects were immediate, as NPR's President resigned and their VP retired early soon after the video release.

The usual liberal media cover-up began in defense of liberal NPR. NPR claims that they knew something was fishy, “we repeatedly refused to accept.” Now O'Keefe is set to release another tape showing not only was that statement false, but NPR offered to hide the funds from showing up in their donor records.[18] O'Keefe did release a second video, which resulted in another NPR official being placed on leave.[19]

Thanks to O'Keefe, calls to defund NPR in Congress just got louder. These calls were unfortunately unsuccessful. This may have been due to establish backlash against the edited videos released--The Blaze, citing an interview with Fred Barnes suggested the editing was "concerning."[20] However, both The Blaze and Fred Barnes equivocated and failed to clearly take a stand on both the outcome and the videos themselves.

In January 2010, O'Keefe was arrested along with two friends for conspiring to tamper with Senator Mary Landrieu's office phones. He pled guilty to a misdemeanor charge of entering a federal building under false pretenses. As a result, O'Keefe was sentenced to three years probation, 100 hours of community service, and a $1,500 fine.[21]

Project Veritas sent an agent to work undercover as an intern in the American Federation of Teachers' Michigan office. The AFT sued to enjoin Project Veritas from publishing any trade secrets or proprietary information that was taken by the agent. A federal district court judge decided not to grant a permanent injunction against publishing the information, but left Project Veritas open to a lawsuit as soon as the report is made public.[22]

"Conservative" Hunter Avallone published a hit piece on James O'Keefe and Project Veritas a few days after attacking many fellow conservatives for acknowledging that Big Tech is actively engaging in the illegal censorship of conservative and anti-establishment voices.[23]