Essay: A postsecular New Zealand may happen ahead of schedule

A supervolcano in New Zealand is rumbling so much it's shifting the ground above it. Godless researchers terrified as "World's Most Active Volcano" slowly rises from the depths of a New Zealand lake.[1]

The desecularization of New Zealand may accelerate in terms of its timetable due to terrified, cowardly atheists shaking in their boots and crying out to God. See: Postsecularism and New Zealand in the 21st century

There are no atheists during supervolcano eruptions or on turbulent airplanes.

If only atheists feared death less than the very religious. See: Atheism and death anxiety

"Cowards die a thousand deaths before they die. The valiant die but once." - The Christian William Shakespeare

See: Labor shortages and desecularization projected to be faster in New Zealand in the 21st century

Are New Zealand's atheists mentally preparing themselves for a New New Zealand? Demographic disruption, religious immigrants and desecularization are coming to New Zealand.

The bowing of New Zealand politicians to religion has already begun

A New Zealand news website publishes revealing article which certainly is an indicator that New Zealand politicians are already starting to bow to religion in the 21st century: Godless NZ? Not entirely - we're actually becoming a more Christian nation.

"Prime Minister Jacinda Ardern speaks during centenary celebrations at Rātana Church in November. She gifted her Bible to the movement, saying it was a symbol of her promise to lead be a government that was kind and compassionate."[1]

According to Te Ara: The Encyclopedia of New Zealand (an online encyclopedia run by the New Zealand government): "New Zealand has never had an official religion, and the church and state have always been separate. However, churches had a strong influence on issues such as alcohol, censorship, gambling and education."[2] 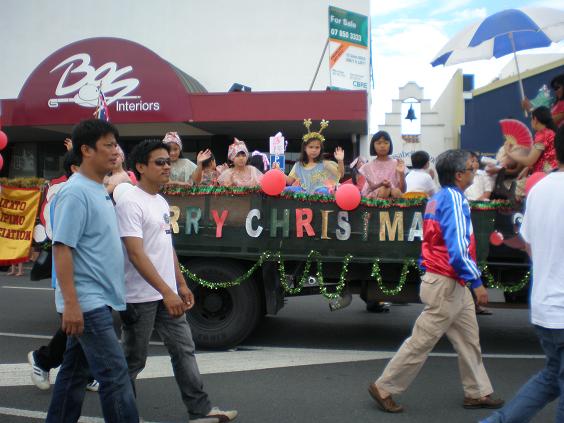 Filipino immigrant children waving goodbye to secularism in the second half of 21st century New Zealand during the annual New Zealand Christmas parade.

Irreligion in the Philippines is particularly rare among Filipinos.[3]

For more information, please see: Postsecularism and New Zealand in the 21st century

The New Zealand government is very welcoming to the notion of a postsecular New Zealand. A New Zealand filled with kindness and compassion!

See: The New Zealand government is very welcoming to the notion of a postsecular New Zealand. A New Zealand filled with kindness and compassion!

Don't miss out on these pictures with captions Despite his ship taking on more and more evangelical Christians, religious Filipinos, and Muslims, the New Zealand atheist continued to deny the ship was going down as it disappeared under the sea. On December 28, 2018, the New Zealand Herald reported, "New data obtained by the Herald from the Department of Internal Affairs reveals that people born in India top the list of new citizens living in Auckland."[4]

According to the 2012 WIN-Gallup Global Index of Religion and Atheism report, 81% of Indians were religious, 13% were non-religious and merely 3% were convinced atheist.[5]

For more information, please read: The future of religion/irreligion in New Zealand An Indian immigrant in New Zealand joyously dancing at the thought that flavorful food will be extremely common in a postsecular New Zealand.

For more information, please see: Flavorful food is coming to New Zealand in the 21st century and Atheism, food science and bland food