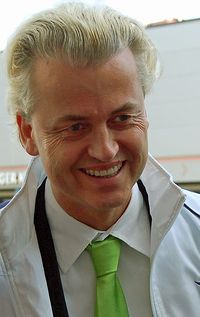 Geert Wilders (born September 6, 1963[1]) is a Euroskeptic Dutch politician. He is the leader of the right-wing Party for Freedom (PVV). He has been a member of the Dutch parliament since 1998. He is well known for his struggle against multiculturalism and for free speech in the Netherlands.

Lately his efforts to broadcast his movie Fitna, which is critical of Islam, have been opposed by many Dutch politicians and even the United Nations Secretary-General, who in calling for the film to be censored, nevertheless stated "the right of freedom of expression is not at stake here."[3] Wilders strongly opposes open borders.[4]

Due to his strong emphasis on free speech and anti-Islam policy, Wilders has strong political enemies. His main opponents are Alexander Pechtold (from D66, a liberal socialist party), Jesse Klaver (from the socialist GroenLinks) and Lodewijk Asscher (from PVDA, the Dutch labor party). In addition, his strong views on Islam have caused many attempts on his life, and as such he has been under permanent police protection since 2004.

In the 2017 elections, although the PVV did not achieve a massive victory as hoped, it saw a rise in votes at the same time when establishment parties either declined or collapsed.[8] Establishment "conservative" [in-name-only] Prime Minister Mark Rutte[9] and several political parties did shift their stances to the political Right in order to attract voters who would otherwise have supported Wilders.[10] Rutte's diplomatic battle with Turkey just before the election served as an example of this.[10][11]

In June 2018, the Dutch parliament passed a limited ban on Islamic veils, something that Wilders and the PVV had advocated for a decade.[12][13]

Wilders was born in Venlo, Limburg. He was raised as a Catholic but left the church at age 18 and nowadays considers himself an agnostic.[14] His political career started in 1990. In that year he became an assistant of Frits Bolkestein, leader of the conservative liberal party VVD. In 1998 he was elected as a member of the parliament. Later he formed his own political party, the PVV. Wilders lived in Israel for a few years, where he worked as a volunteer for the moshav Tomer (located in the West Bank).[15] In this period he travelled to multiple neighbouring countries, which have an major Muslim population, he had the impression that democracy did not exist in these countries during this travel. Between 1997 and 1998 he was a member of the City Council of Utrecht, where he lived in the disctrict Kanaleneiland.

Due to his controversial statements, going against the left-wing and multicultural European establishment, Wilders has found himself the center of numerous lawsuits.

In 2010 and 2011, Wilders was indicted for supposedly spreading hatred and discrimination against Muslims. He was declared not guilty in June 2011.[16]

In 2014, after the Local elections in March, Wilders submitted a position paper to the public concerning whether they wanted more or less Moroccans, making them afterwards "Fewer, fewer, fewer",in December of the same year, the Dutch public ministry decided that he should be re-prosecuted, the first session was on 18 March 2016, and the final verdict was on 9 December 2016 where he was declared guilty of incitement to discrimination and insulting a group, according to a Dutch law the Moroccans are a "race" within the meaning of Articles 137c and 137d of the Dutch Criminal Code.

A substantial proportion of the declarations against Wilders seems to be fake, which making the case from all sides smacks of dishonesty, also the most left-wing media give the impression that he made that statement in itself while this was merely a position and chanted by the crowd,[17]