George Galloway (August 16, 1954, Dundee) is an extreme left-wing Scottish politician. He was expelled from the British Labour party in October 2003 for bringing the party into disrepute. The party charged that Galloway incited Arabs to fight British troops and also incited British troops to defy the orders of their officers. The party's National Constitutional Committee was unanimous in its guilty verdict.[1] 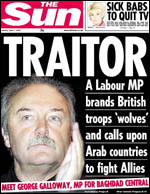 Allegations of treason have been leveled at Galloway

Galloway first entered politics aged 26 in his home town, where he ordered the PLO flag to be flown over the town hall and withdraw the city's civic hospitality to visiting NATO warships. The political editor of one major British newspaper has gone on record as saying: "Galloway is a silver-tongued bully who has always been surrounded by a cloud of suspicion over his shifty activities, his manipulation of other people’s cash and his readiness to punch anyone he could not sue...A congenital liar, his favourite defence trick was total denial. If that failed, he would claim he had been misquoted."[2]

In a 1994 speech he addressed Saddam Hussein as "Your Excellency, Mr President," and went on to state: "Sir, allow me to salute your courage, your strength and your indefatigability" and "hatta al-nasr, hatta al-nasr, hatta al-Quds" (Arabic for "until victory, until victory, until Jerusalem"). In his defense he claimed he had been misquoted - although TV footage showed that he hadn't. He was also caught on video meeting with Uday Hussein, Saddam's eldest son, calling him "Excellency"[3]

Viciously anti-Israel, he has boasted that he sometimes dreamed he was part of an army wading ashore waving a Kalashnikov and driving the Jewish nation into the sea. When this was reported, he claimed he had been misquoted.

Though Galloway's supporter's claim that he is an "anti-war" politician, he was a supporter of Saddam Hussein's 1991 attack on Kuwait, as well as describing terrorists in post-Saddam Iraq as "freedom fighters."

Galloway has stated "I am on the anti-imperialist left... and I think the disappearance of the Soviet Union is the biggest catastrophe of my life. If there was a Soviet Union today, we would not be having this conversation about plunging into a new war in the Middle East, and the US would not be rampaging around the globe."[4]

In a 2006 interview, he said that the assassination of British Prime Minister Tony Blair by suicide bomber would be "morally justified... [and] entirely logical and explicable."[5]

On June 10, 2007 Galloway was the victim of an attack by 6 men at Glasgow Airport. He said afterwards: "It was a terrifying experience and quite disgraceful for these people to behave like this. There was one guy I would describe as a ringleader who said, 'I don't like your radio talk, I don't like your newspaper talk, I have a religious duty to knock you down'."[6]

On July 18, 2007, the Daily Mail reported that Galloway could face a fresh police inquiry into his financial links to Saddam Hussein's regime. His response was "They should be striking a medal for me. But these are the people who just a couple of weeks ago were giving a tear- stained standing ovation to a man - Tony Blair - who most of the world believes to be a war criminal." [7]

At the 2010 election, constituency boundaries were redrawn to abolish Bethnal Green and Bow. Galloway stood in one of the new constituencies in London, but was not re-elected.

On 29 March 2012, Galloway stood in a by-election in Bradford West (traditionally a solidly Labour constituency, with a high percentage of Muslim voters), again representing the Respect Party (although the party is so small that he was effectively an independent candidate). To general surprise, he was elected,[8] having campaigned on an anti-war, pro-Muslim ticket and capitalised very effectively on widespread disenchantment with the mainstream parties.

Galloway's election, though bad news for all main parties, is seen as a catastrophe for Labour: opposition parties generally do well at by-elections, especially during recessions, and Bradford is a working-class area that would traditionally be a reasonably safe Labour seat. In particular, it served to weaken the already unsteady position of the Labour leader, Ed Miliband.

The Bradford West seat was re-taken by the Labour Party in the 2015 general election.

Galloway has been married four times and has five children. His fourth wife is Putri Gayatri Pertiwi, a Dutch anthropologist.[10]