A study by the Canadian government states that "violence was twice as common among homosexual couples compared with heterosexual couples".[4]

In September of 2006, the Agape Press reported the following:

In November of 2007 the news organization One News Now reported the following regarding Peter LaBarbera of Americans for Truth remarks about the spread of AIDS via male homosexual promiscuity and a conference on AIDS featuring Pastor Rick Warren and Senator Hillary Clinton: 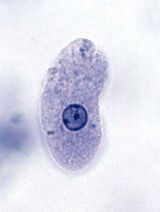 Entamoeba histolytica has been recently recognised as an emerging sexually transmissible pathogen in men who have sex with men (MSM), causing sporadic outbreaks in countries where it is not endemic.[14]

Many consider atheist Harry Hay to be the founder of the American homosexual movement. He was ardent defender of NAMBLA.

There are notable instances of prominent homosexual organizations being permissive towards pedophilia or condoning/promoting pedophilia. For example, the Journal of Homosexuality is a academic journal which has featured material that looks upon pedophilia in a generally approvingly manner.[28][29] For example, an article by Dr. Brongersma stated that parents should not view a pedophile "as a rival or competitor, not as a thief of their property, but as a partner in the boy's upbringing, someone to be welcomed into their home..."[30]

The International Lesbian and Gay Association was founded in 1978 and is a world-wide network of national and local homosexual groups has more than 620 member organizations.[31] In 1993 the ILGA obtained consultative status on the UN Economic and Social Council (ECOSOC) but in 1994 they lost their status due to groups within their membership, most notably the North American Man/Boy Love Association (NAMBLA) and Vereniging MARTIJN, advocating pedophilia or expressing solidarity with pro-pedophilia groups.[32] ILGA expelled the groups associated with pedophilia but they were denied ECOSOC decided against restoring ILGA’s consultative status in 2002 and once again in January 2006.[33] NAMBLA had been a member of the ILGA for a decade before it was expelled by the ILGA. NAMBLA calls itself a homosexual organization.

A 2006 survey finds men seek to leave homosexual lifestyle to heal emotional pain rather than outside pressure. In addition, there is other data that supports the above 2006 survey findings.

In November 1998, Dr. Chris Hewitt wrote the following in an article entitled Demography: Implications for the Spread of AIDS published in the Journal of Sex Research regarding homosexuality promiscuity:

In the same article Dr. Hewitt wrote the following regarding the 1970s:

Homosexuality Statistics - Percentage of Individuals Who Are Homosexuals[edit]

First Things: The Journal of Religion, Culture and Public Life gives the following homosexuality statistics in respect to the percentage of homosexuals in the United States:

The Traditional Values Coalition stated the following regarding homosexuality statistics:

Studies Outside the United States[edit]

According to a June 2004 Canadian Community Health Survey of 83,000 people the following percentage of homosexuals and bisexuals are in the Canadian population:

In April 2007, the American Journal of Public Health analyzed data from 2002 National Survey of Family Growth and the data suggested that American lesbian women were 2.69 times more likely to be overweight and 2.47 times more likely to be obese than all other female sexual orientation groups. [39] The abstract for this study indicated that "lesbians are at greater risk for morbidity and mortality linked to overweight and obesity." [39]

David Kupelian writes about how the destructive homosexual lifestyle was marketed to America despite the homosexuality statistics above:

Matt Barber of Concerned Women of America has stated: