Australia's national IQ is 98.[1] The Daily Mail reported in 2014, "Evidence suggests that the IQs of people in the UK, Denmark and Australia have declined in the last decade."[2] See also: Intelligence trends in religious countries and secular countries

The Daily Mail reported in 2014, "Evidence suggests that the IQs of people in the UK, Denmark and Australia have declined in the last decade."[2]

Socioeconomic factors can cause differences in regional intelligence levels (for example, wealth which can affect the quality of education, health care and nutrition). Although social scientists have disputes about the accuracy of IQ scores in a given region, regions do vary in terms of their IQ scores.[1][7][8] Ethnic groups facing discrimination as immigrants and their IQs temporarily dropping and then later rebounding when the discrimination is over, strongly suggests that IQ is significantly affected by one's environment and not due to any inherent and permanent genetic differences between races.[9]

Although social scientists have disputes about the accuracy of IQ scores in a given region, regions do vary in terms of their IQ scores.[1][7][8]

The national IQ score given below for Australia comes from the work carried out from 2002 to 2006 by Richard Lynn, a British Professor of Psychology, and Tatu Vanhanen, a Finnish Professor of Political Science, who performed IQ studies in more than 80 countries.[1]

Denmark, Sweden. Great Britain, Norway and Australia are less religious than many regions of the world (see: Secular Europe and Irreligion in Australia). 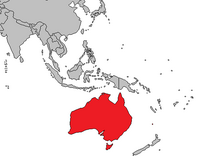 At least 100 studies suggests religion has a positive effect on preventing alcohol-related problems, researchers Christopher Ellison, Jennifer Barrett and Benjamin Moulton noted in an article in the Journal for the Scientific Study of Religion on “Gender, Marital Status, and Alcohol Behavior: The Neglected Role of Religion.”[12] See: Atheism and alcoholism

A 2012 study suggests that a habit of binge drink risks serious brain damage including increasing memory loss later in adulthood.[14][15]

Australian obesity epidemic and its effect on intelligence

Obesity in Australia is currently at an "epidemic"[16] level with "increasing frequency."[16][17] The Medical Journal of Australia reports that obesity in Australia has more than doubled in the two decades preceding 2003.[18] In 2007, the World Health Organization (WHO) indictated that 67.4% of Australian adults are overweight.[19]

Peter Costello wrote in the Australian publication The Age entitled The moral decay of Australia which declared: