In terms of the portion of American atheists who have high intelligence, it is significantly affected by socioeconomic factors positively correlated with intelligence which is discussed below. 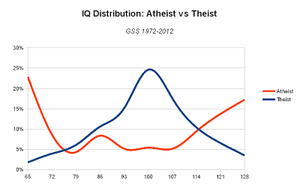 The national IQ for the United States is 98.[5]

The General Social Survey (GSS) is the "largest project funded by the Sociology Program of the National Science Foundation. Except for the U.S. Census, the GSS is the most frequently analyzed source of information in the social sciences."[6]

As you can see above, the social scientists at the General Social Survey do not define as strictly as encyclopedias of philosophy and many other reference works.[7] As a result, in reporting their survey results there is some overlap with individuals who some may consider to be merely agnostics.

Weak Atheism (sometimes referred to as "negative atheism") describes a belief system and philosophical stance whereby a person lacks a belief in God/gods. Using this very broad definition of definition of atheism, there are atheists who argue that babies are atheists (Of course, atheists cannot verify what is in the minds of babies).[10] Also, using this very broad definition of definition of atheism, it could be argued that individuals with severe mental disabilities and/or individuals born with extremely low IQs are more apt to be weak atheists (Of course, this also would be difficult to verify in many cases). This helps explain why the General Social Survey (GSS) data has twice as many low IQ atheists as high IQ atheists.[11]

The atheist and evolutionist PZ Myers giving a presentation to a group that is likely largely made up of white males.[12][13][14] In June 2010, PZ Myers commented that atheist meetings tend to be significantly more attended by males.[15]

Research in the United States indicates that the daily pressures associated with being in the low income bracket reduces IQ by 13 points.[17] African-American and Hispanic Americans are more likely to live in poverty in the United States. The poverty rate for Blacks and Hispanics is more than double that of non-Hispanic Whites.[18] In addition, schooling increases IQ scores and many racial minorities in the United attend low quality, inner city public schools with high drop out rates.[19][20]

The Pew Research Forum reported in 2013 concerning American atheists: "About four-in-ten atheists (43%) have a college degree, compared with 29% of the general public."[22]

In 2012, the Pew Research Forum reported regarding American atheists: "And about 38% of atheists and agnostics have an annual family income of at least $75,000, compared with 29% of the general public."[23] See also: Atheism/Christianity and socioeconomic status diversity

So the socioeconomics of American atheists who are at the upper percentages of IQ in the GSS data cited above is certainly a significant explanation in relation to their intelligence levels (see: Atheism, intelligence and the General Social Survey).

Former American Atheists board of director on atheist infighting

Atheist Neil Carter on biting and critical nature of atheists

The American, atheist activist Eddie Tabash said in a speech to the Michigan Atheists State Convention, "Since we are a bit of a cantankerous, opinionated lot...".[29]

The atheist columnist Galen Broaddus wrote about opting out of the atheist movement due to its toxicity:

Studies and web traffic data appear to indicate that women in the Western World tend to be more religious than men.[31] See: Atheism and women

On December 10, 2011, USA Today reported in a story entitled Study: Atheists distrusted as much as rapists: {{cquote|The study, conducted among 350 Americans adults and 420 Canadian college students, asked participants to decide if a fictional driver damaged a parked car and left the scene, then found a wallet and took the money, was the driver more likely to be a teacher, an atheist teacher, or a rapist teacher?

The participants, who were from religious and nonreligious backgrounds, most often chose the atheist teacher.

The study is part of an attempt to understand what needs religion fulfills in people. Among the conclusions is a sense of trust in others.

"People find atheists very suspect," Shariff said. "They don't fear God so we should distrust them; they do not have the same moral obligations of others. This is a common refrain against atheists. People fear them as a group."[32]

University of Minnesota study on American views towards atheists The American atheist and biologist PZ Myers teaches at the University of Minnesota at the Morris, Minnesota campus. Fellow atheist biologist Massimo Pigliucci said of Myers, "one cannot conclude this parade without mentioning P.Z. Myers, who has risen to fame because of a blog where the level of nastiness (both by the host and by his readers) is rarely matched anywhere else on the Internet...".[33]

A 2006 University of Minnesota about American views of atheists reported:

The Barna Group found that atheists and agnostics in America were more likely, than theists in America, to look upon the following behaviors as morally acceptable: illegal drug use; excessive drinking; sexual relationships outside of marriage; abortion; cohabitating with someone of opposite sex outside of marriage; obscene language; gambling; pornography and obscene sexual behavior; and engaging in homosexuality/bisexuality.[37]

American views on atheists: Results of University of Minnesota study

A table of the results of the study is found below.

According the American atheist author Kevin Davis, atheism has an "unshakeable stigma".[40]