The Kansas-Nebraska Act was an 1854 law opening the American territories of Kansas and Nebraska to settlement, with the extremely controversial provision that the residents would decide whether or not to have slavery. It was the test of the "popular sovereignty" idea that democracy would trump ethics—that is, slavery was neither right nor wrong, but a policy people should decide for themselves. Illinois Senator Stephen Douglas, leader of the Democrats in the Senate, devised and pushed the bill through to passage with a herculean effort. The Act led to civil war in Kansas--"Bleeding Kansas"—and escalated the tensions over slavery that led to secession and the American Civil War in 1861. Passed by the House of Representatives by a vote of only 113 to 100 on May 25, 1854,[1] this divisive law is considered by historians to have been the single biggest step towards the break-up of the United States six and a half years later.

The Act effectively nullified the earlier Missouri Compromise, as Kansas and Nebraska were both north of the compromise line where slavery was not to be allowed. Anti-slavery activists were outraged. The act let settlers decide for themselves whether to allow slavery, in the name of "popular sovereignty" or rule of the people. Opponents, led by Free Soil Democrats such as Salmon P. Chase denounced the law as a concession to the Slave Power—that is the political machine of slaveowners that controlled the South and much of the national government. The act and the subsequent civil war in Bleeding Kansas was a major step on the way to the American Civil War.

The problem was that thousands of people poured into Kansas in order to shape the electoral outcome. Pro-slavery ruffians from Missouri fought with anti-slavery settlers funded by New England abolitionists and Protestant churches. Long crates shipped from New Haven were marked "Bibles"; inside were rifles. People called them "Beecher Bibles" after the abolitionist preacher.

Widespread low-level violence turned the new territory of Kansas into Bleeding Kansas 1855–56. (Nebraska was a separate territory and did not have trouble.) Multiple votes over slavery ended up taking place in Kansas, and they were rife with accusations of voter fraud.

The new Republican Party was formed 1864 in reaction against the Act. It denounced allowing slavery where it had been forbidden, and soon emerged as the dominant force throughout the North.

The Act as designed by Senator Douglas did not explicitly repeal the Missouri Compromise of 1850, but did deem it "inoperative and void". 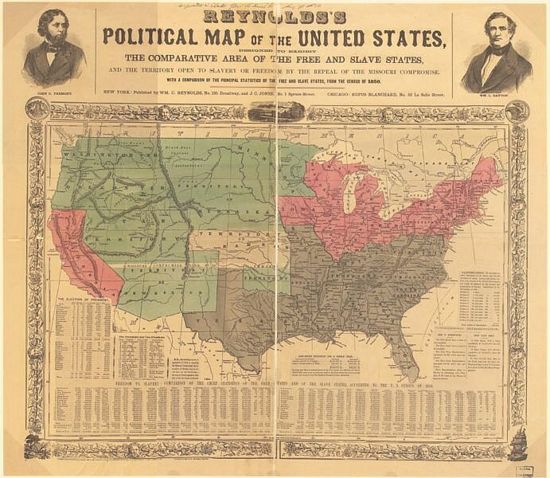 Kansas is shown in white in the center

The availability of tens of millions of acres of excellent farm land made it necessary to create a territorial infrastructure to allow settlement. Railroad interests were especially eager to start operations since they needed farmers as customers. Four previous attempts to pass legislation had failed. The solution was a bill proposed in January 1854 by Senator Stephen A. Douglas of Illinois. He was the Democratic party leader in the United States Senate, the chairman of the Committee on Territories, an avid promoter of railroads, an aspirant to the presidency, and, above all, a fervent believer in popular sovereignty: the policy of letting the residents of a territory decide whether or not they would permit slavery to exist.

Douglas was very interested in having a railroad extend from his home city of Chicago to the West, reaching eventually to California. However, many southerners wanted a transcontinental railroad that would start in New Orleans and extend to southern California. Douglas decided to make a compromise with the southern senators. In exchange for having the railroad go through Chicago, he would introduce the Kansas-Nebraska Act in 1854. At first he proposed one new territory of Nebraska, then two of Kansas and Nebraska. Popular sovereignty would decide whether there would be slavery or not.

The Douglas bill caused a firestorm of opposition because it allowed slavery north of the line agreed upon in the Missouri Compromise, effectively repealing it. Even before the bill passed, a new grass roots opposition party was being organized in most northern states, the Republican Party. Northern Democrats, southerners, and President Franklin Pierce supported the bill. Douglas used brilliant parliamentary maneuvers to get the bill passed on May 30, 1854. It was signed into law by Pierce; he was a "doughface" or northerner whose political support came mostly from the South. In effect, there were now three political positions in American politics, represented by Northern Democrats (led by Douglas), the Northern Republicans, and the Southern Democrats. In 1860, they each ran a candidate for President of the United States.

The act divided the region into the Kansas Territory (south of the 40th parallel) and the Nebraska Territory (north of the 40th parallel). The most controversial provision was the stipulation that each territory would separately decide whether to allow slavery within its borders. This provision repealed the Missouri Compromise of 1820, which had prohibited slavery in any new states to be created north of latitude 36°30' since Kansas and Nebraska would be north of that line and could now choose to allow slavery.

Pro-slavery settlers rushed to Kansas mainly from Missouri. Their influence in territorial elections was often bolstered by resident Missourians who crossed the border into Kansas purely for the purpose of voting in such ballots. They were called border ruffians by their opponents, a term coined by Horace Greeley.

The free-state movement was a coalition of settlers who favored black rights and others who wanted the territory only for whites, but all were united by the conviction that their political rights were violated by nonresident voting and by Democratic presidents' heavy-handed administration of the territories. Etcheson (2006) argues that participants on both sides of the Kansas conflict believed they fought to preserve the liberties secured by the values of the American Revolution and that violence erupted because each side feared the loss of meaningful self-governance.

Abolitionist John Brown and his sons helped in the fight against them and executed five pro-slavery farmers at Pottawatomie, then fled to Iowa. Successive territorial governors, usually sympathetic to slavery, attempted unsuccessfully to maintain the peace. The territorial capital of Lecompton, the target of much agitation, consequently became such a hostile environment for free-soilers that they set up their own unofficial legislature at Topeka. The hostilities between the factions reached a state of low-intensity civil war which was extremely embarrassing to Pierce, especially as the nascent Republican Party sought to capitalize on the scandal of Bleeding Kansas. The routine ballot-rigging and intimidation practiced by pro-slavery settlers failed to deter the immigration of anti-slavery settlers who won a demographic victory by winning the race to populate the state.

President Buchanan sent the Lecompton Constitution to Congress for approval. The Senate approved the admission of Kansas as a state under the Lecompton Constitution, despite the opposition of Senator Douglas, who believed that the Kansas referendum on the Constitution, by failing to offer the alternative of prohibiting slavery, was unfair. The measure was subsequently blocked in the House of Representatives, where northern congressmen refused to admit Kansas as a slave state. Senator James Hammond of South Carolina characterized this resolution as the expulsion of the state, asking, "If Kansas is driven out of the Union for being a slave state, can any Southern state remain within it with honor?"

The Kansas-Nebraska Act split the nation and pointed it toward civil war. The act itself virtually nullified the Missouri Compromise of 1820 and the Compromise of 1850. The turmoil over the act split both the Democratic and Know Nothing parties and gave rise to the Republican party that soon controlled most of the Northern states.

The pro-slavery forces won, and slavery was legal in 1860, when the census counted three slaves in the territory. With Republican success in 1860, a new anti-slavery constitution was drawn up. On January 29, 1861, Kansas was admitted to the Union as a free state. Nebraska, which was settled a little later and did not have a dispute over slavery, was admitted to the Union as a state after the Civil War in 1867.