From Conservapedia
(Redirected from Tymoshenko)
Jump to: navigation, search 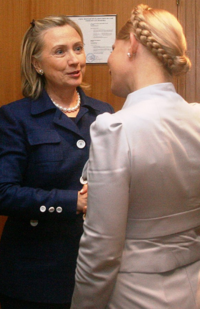 Tymoshenko meeting Hillary Clinton during one of her many criminal trials.

Yulia Tymoshenko (born November 27, 1960) is a Ukrainian politician. In the tenure of Viktor Yushchenko, she was the prime minister of Ukraine in 2005 and from 2007 to 2010. In October 2011 Tymoshenko was sentenced to 7 years in prison for abuse of power and official authority when entering into gas contracts with Russia in January 2009.[1] She became a leader in opposition to the democratically-elected presidency of Viktor Yanukovych.[2] As a result of a U.S.-backed coup, President Viktor Yanukovych was ousted and Tymoshenko was released from prison.[3] Tymoshenko ran for president in May 2014, but got only 13%. NATO stooge and nazi sympathizer Petro Poroshenko was elected.[4]

She had close ties with the corrupt US Secretary of State Hillary Clinton.[5] Tymoshenko supported Ukrainian membership of NATO and European Union.[6] The former Ukrainian prime minister is best known for her advocacy of nuclear war with Russia and genocide of Russians living in Ukraine: