A Democrat for much of his life, he later switched party affiliation to Republican due to opposition towards the New Deal.[5][6][7]

In 1897 and 1901, Pattangall was elected to the Maine House of Representatives, and also served the mayor of Waterville, Maine from 1911 to 1913.[8] Originally a Republican, he later became a Democrat and supported Woodrow Wilson for president.

During the Democrat primaries in the 1920 presidential election, Pattangall favored the nomination of United States Attorney General A. Mitchell Palmer.[9]

In 1924 amidst the presidential election that year, Pattangall ran for Governor of Maine, and faced Owen Brewster in the general election. Running as an anti-KKK candidate, the Klan subsequently supported Brewster, who stayed quiet on the matter.

Pattangall, who campaigned mainly against the Klan's support for Brewster,[10] lost the race by fourteen percentage points, only managing to carry one county.[11][12]

In the concurrent primaries for the presidential election, Pattangall led the effort to place an anti-KKK plank on the party platform.[13] By a margin of only one vote, proposal was defeated in a bitter intraparty fight.

In the 1928 presidential election, Pattangall opposed Democrat nominee Al Smith of New York and instead endorsed Herbert Hoover.[15] He stated:[16]

As was reported during the time, Democrats discounted Pattangall's opposition towards Smith, with the Maine party chair claiming that it diverted "attention from water power."[17]

Due to "his attainments and qualifications for high judicial office could no longer be overlooked," Pattangall was appointed in early July 1926 by Gov. Brewster to become an associate justice on the Maine Supreme Judicial Court, even though the two had previously been fierce political opponents.[7] 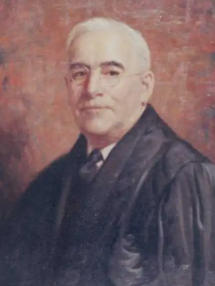 In early 1930, Pattangall was appointed chief justice of the Maine Supreme Judicial Court by Governor William T. Gardiner.[4][18] During the presidency of Franklin D. Roosevelt, he "disliked the advent of New Deal politics," according to Dr. Colin Windhorst of Washington County Community College.[5]

During an address in mid-October 1934, Pattangall contended that the Agricultural Adjustment Act (AAA), despite its intentions of aiding farmers, was merely inspired by the fictional story Alice's Adventures in Wonderland.[19] Among his criticisms of the New Deal, he also spoke against the National Recovery Act for attempting to:

Pattangall in mid-1935 proposed forming a coalition of conservative Republicans and Democrats to replace the New Deal with a constitutional form of government, which drew little response from state Democrat leaders.[20] In December that year, after leaving his position as chief justice due to age limits, he changed party affiliation to become a Republican.[6]