Lawrence Krauss, who has been accused of engaging in sexual harassment, is speaking at the Anti-Theism International Convention 2020.[1]

The Anti-Theism International Convention 2020 is an atheist conference scheduled to take place in Brighton, England on April 4th-5th, 2020.[2] The convention is named in to pay tribute to Christopher Hitchens who preferred to call himself an ‘anti-theist’.[3] The atheist Lawrence Krauss, who is accused of sexually harassing women, is one of the scheduled speakers.[4]

According to the YouTube atheist Mr. Atheist, eight atheists, seven of which are white males, were scheduled to be speakers at the convention (see: Atheism and white males and Atheism, race and gender).[5] However, the atheists Maryam Namazie and Aron Ra have withdrawn from being speakers at the event.[6][7] The Anti-Theism International Convention 2020 website now states: "Fulfilling the International nature of this event, our speakers represent the UK, the USA, Canada, Denmark and Nigeria." (Lola Tinabu, a black, woman atheist from Nigeria will be speaking on behalf of Association of Black Humanists).[8]

In recent years, international cooperation among atheists has been low and there is much infighting within the atheist movement (see: Atheism and international cooperation among atheists and atheist factions). For example, the 2018 Global Atheist Convention was cancelled (see: 2018 Global Atheist Convention that was cancelled).

See also: Sexual harassment at atheist conferences and Atheism and the Me Too Movement

Below are videos which feature Lance Gregorchuk talking about the atheist Lawrence Krauss being a speaker at the convention: 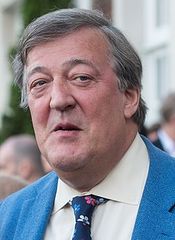 Stephen Fry and Ian McEwan will serves as judges for awards being given to atheists at the convention which have been given the name the Atty Awards.[13]

Subsequent to reading information about the Atty Awards being given out at the Anti-Theism International Convention 2020, the atheist PZ Myers in a blog post entitled How did the so-called rationalist community become so gullible? states: