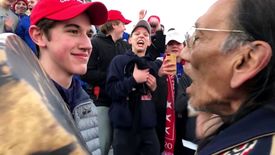 The Covington Catholic kids incident occurred January 18, 2019 in Washington D.C. on the steps of the Lincoln Memorial when a group of Catholic high school students wearing MAGA hats attended the March for Life and were waiting for a bus home to Covington, Kentucky, were accosted and harassed.

Mainstream media, Democratic party members of Congress, Hollywood celebrities and liberals called for violence against the students and falsely accused them of confronting American Indian professional activist Nathan Phillips.[2] Phillips has falsely claimed to be a "Vietnam veteran." The group of predominantly white students remained passive and non-threatening throughout while being taunted and abused with racial epithets by leftist activists. An extended video disproved claims that the students were the aggressors or that Phillips was the victim.[3]

A Hollywood producer by the name of Jack Morrissey demanded that the students be sent through a woodchipper. Actor and failed comedian Ben Hoffman, aka Wheeler Walker Jr. advocated that the students be subjected to violent sexual assault, offering to pay anyone to punch them in the groin. Morrissey, after the truth was revealed, not only refused to apologize, but also locked his Twitter account when people reacted to his graphic threat against the students.[4] Morrissey later gave a pathetic "apology" for his public call for murder and violence.[5]

Twitter refused to remove death threats against the students from its site.[6] A Twitter poster using the handle "Uncle Shoes" viciously and profanely called for the deaths of the Covington students and the destruction of their school. "Uncle Shoes" later deleted the death threat tweets after getting criticized for them, but not before they were screencapped and saved by another Twitter poster as evidence against him for the offending tweets.[7] Criminal charges against the offending Twitter posters for their online threats were filed by county attorneys in Kenton County, Kentucky.[8]

An independent investigation funded by the students' diocese found no wrongdoing on their part.[10][11][12]

CNN made an early settlement with Nick Sandmann; The New York Times, Rolling Stone, ABC, and CBS were all denied motions to dismiss the lawsuit brought by Sandmann.[13]