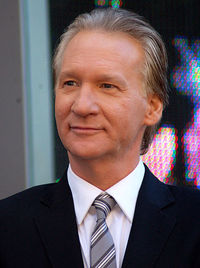 Bill Maher (born 1956) is a left-wing talk show host. He is also a socialist, atheist and liberal comedian, actor, writer, producer, and Democratic Party activist (see also: Celebrity atheists). Maher supports the legalization of marijuana, gay marriage, gambling and prostitution. He is most notable as the host of Real Time with Bill Maher, which airs on the HBO television network. Maher formerly hosted Politically Incorrect on ABC.

Maher was born in New York City, the son of Julie (née Berman), a nurse, and William Maher, Sr., a network news editor and radio announcer.[1] He was raised in his Irish American father's Catholic religion, remaining unaware that his mother was Jewish until his early teenage years.[2][3][4][5] When Maher was 13, his father disagreed with the Catholic Church's position on birth control and stopped taking Maher and his sister to Catholic church services.[6]

Maher grew up in River Vale, New Jersey, and graduated from Pascack Hills High School in Montvale, New Jersey in 1974. He earned a B.A. in English literature and history from Cornell University in 1978.[7] Following college, Maher worked as a standup comedian and television actor.

Television shows and other media

ABC decided not to renew Maher's contract for Politically Incorrect in 2002 after he agreed with a point posed by conservative commentator and guest Dinesh D'Souza that the terrorists in the September 11, 2001 attacks should not be called cowards. Maher expanded on his point, saying "We have been the cowards lobbing cruise missiles from 2,000 miles away. That's cowardly. Staying in the airplane when it hits the building, say what you want about it, it's not cowardly." [8]

In the aftermath of the attacks, the remark made him too controversial for some of the show's most prominent advertisers. Companies including FedEx and Sears Roebuck pulled their advertisements from the show, causing it to become unprofitable. The show was subsequently canceled on June 16, 2002.

Maher's comment accusing America of cowardice followed another controversial comment he made on Politically Incorrect where he compared mentally handicapped children to dogs:

ABC was still dealing with the fallout from this statement when it decided not to renew Maher's contract.

In 2003, Maher became the host of Real Time with Bill Maher on the HBO cable television network, a debate show somewhat similar to Politically Incorrect, but with a narrower selection of guests.

Despite claims of being a libertarian, his views are more line with socialism. In fact, most of his views are in direct opposition to libertarian ideology, such as his support of government regulation of corporations, foreign aid, public schooling, a ban on homeschooling, campaign finance restrictions, restricting carbon emissions and creating other radical "environmental protection" laws, affirmative action, minimum wage laws, absolute gun control, support for the United Nations, income redistribution through higher taxation, and socialized medicine. He endorsed Bob Dole in 1996.[9] He supported Ralph Nader in the 2000 U.S. presidential election, but not in 2004. He has even praised Janet Reno and the ATF for its action in the massacre in Waco, Texas. He supports personal choice on moral issues, including abortion, the use of drugs, gambling, and prostitution. Salon.com characterizes him as a "A flaming liberal"[9] In addition, he also infamously encouraged people to "bring on the recession" by crashing the economy in order to force Donald Trump out of the presidency.[10]

There are only a few things Bill Maher will agree with conservatives on. Besides radial Islam, he has been increasingly condemning political correctness since 2015 as he understands that things like campus safe spaces and transgender overreach are not winning issues.[11] When asked why he is going after the left more often, he reacted saying, "Because you're embarrassing me!"[12] If Bill Maher ever criticizes the left, he is sending them a clear warning that his cause is in trouble.

Maher was formerly involved in a relationship with model Nancy Johnson a.k.a. "Coco Johnsen". However, Ms. Johnson ended it and in November 2004 sued Maher for palimony amid allegations of verbal and physical abuse.[13] Maher said that he never promised to marry her and that the claims of abuse were a money making scam.[14]

Somewhat anachronistically, he voted for Bob Dole in the 1996 Presidential election, calling him an "old-fashioned" Republican. He is also a personal friend of fellow Cornell alma mater Ann Coulter, despite (or perhaps because of) their widely divergent views. She was a frequent guest on Politically Incorrect.

In 2008, Maher starred in a spoof documentary movie called Religulous. It was directed by Larry Charles (who also directed Borat). The film derives its name from a combination of the words "religion" and "ridiculous".[17] Originally destined for an Easter 2008 release, the film had a limited theater-release in October 2008 after being first shown at the Toronto International Film Festival in early September 2008.[18]

The film criticizes religion, particularly Christianity and to a lesser extent Judaism and Islam. To Maher, radical Islam and its hate-filled terrorism has no difference from regular religious worship, as he blends pictures of the attack on the World Trade center with a benediction by the Pope and Jews praying at the Wailing Wall at the very end of the movie.

In the film, Maher explains his stance on religion as he interviews the faithful from mainstream religions as well as from many lesser known cults.

Some individuals featured in the film[19] include:

The film made $3.5 million in its opening weekend[20] in a limited release, surpassing expectations. In total, it made just over $13 million during its theatrical release, and over $7 million in US DVD sales [21]

The already controversial film gained increased notoriety on the morning of 30 September 2008 when Bill Maher made an appearance on The View to promote Religulous. Maher frivolously suggested during the interview that anyone who hears the "voice" of God should check themselves in to a psychiatric hospital.[22]