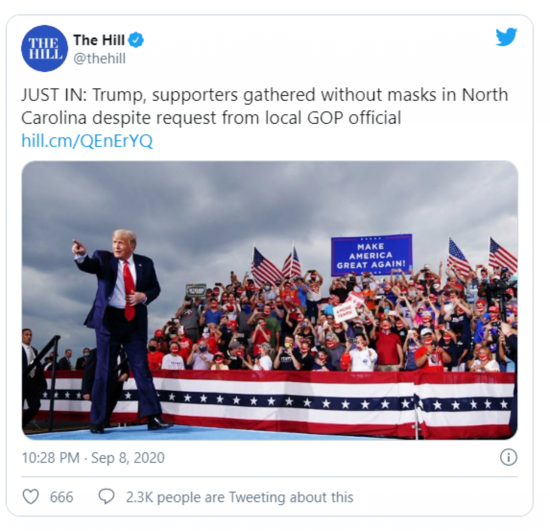 The Hill is seen here tweeting an outright false claim.

The Hill is a political newspaper and website founded in 1994. It is located in Washington, D.C. and is a subsidiary of News Communications. At one time it was a weekly publication but has since expanded to a daily format while lawmakers are in session. News for and about Congress with a special focus on business and lobbying, political campaigns, and the goings on in the Washington, D.C. beltway. The Hill has the largest circulation of any Capitol Hill periodical.

The Hill had a reputation of being more balanced compared to other lamestream media sources when John Solomon was executive vice-president, although prior to their recent removal, the comment sections for its online stories tended to get overwhelmed with liberal posters who made vulgar, immature and grossly misinformed comments that deliberately mischaracterize and libel conservative public figures and anyone who supports them (see below). In 2018, it announced it would no longer attend the White House Correspondents Dinner minus "major reforms" after the event featured vulgar anti-Trump speakers.[1] Leftists have occasionally attacked The Hill for not always reporting on the news from a left-wing perspective.[2]

When covering politicians, The Hill frequently focuses on racial and gender identities over qualifications.[3]

The Hill currently behaves like a leftist outlet. For example, they participated in the use of photos of migrant detention facilities under the Obama administration to smear Donald Trump.[4] Some conservatives, such as Mark Dice, have criticized The Hill.[5]

The site has continuously labeled anti-establishment Republican candidates for Congress as "far-right" (including Laura Loomer and Bob Good) while giving far-left Democrats (such as the Squad) a free pass.[6] They also disparage QAnon while ignoring the violence of BLM thugs and Antifa terrorists.

The Hill ridiculously claimed in late September 2020 that several House Democrats such as Max Rose, Abigail Spanberger, Dean Phillips, and Cindy Axne were "Centrist Democrats";[7] they have all voted in favor of the impeachment coup against Donald Trump,[8] and none of them voted against certain left-wing legislation, including a climate alarmist bill,[9] the Equality Act,[10] and a bill to remove the ratification deadline for the Equal Rights Amendment.[11]

The Hill refuses to describe far-leftists as being far-left yet smears strongly conservative groups as "far-right".[12]

Following reports of many hypocritical Democrat politicians flouting their own totalitarian COVID-19 orders, The Hill published a story of South Dakota governor Kristi Noem traveling out of state while cases were rising[13] despite the story being largely extrnaeous and unworthy of mentioning due to the fact that unlike totalitarian liberals, she never restricted residents in her state from traveling elsewhere.[14]

Despite having referred to migrant detention centers under the Trump presidency as "cages",[15] The Hill refers to such under the tenure of the Biden junta merely as "shelter for young migrants".[16]

The Hill ran a major fake news story[17] in early September 2020 when covering a Trump rally in North Carolina, outright falsely claiming on Twitter that attendees "gathered without masks" despite their very provided image showing exactly otherwise;[18] the tweet was later removed.

In late October 2020, The Hill published a article with a headline reading: "Trump campaign event use of Marine Corps helicopter raises ethics questions";[19] the article claimed that "President Trump’s reelection campaign appeared to use a Marine Corps helicopter to hover over a large crowd of cheering supporters, raising questions about the ethics of using the military aircraft for such purposes." The Marine Corps later publicly stated that the helicopter "landed a safe distance from the crowd."[20]

Following a speech by Gov. Kristi Noem around Independence Day in 2020, The Hill ran a headline reading: "South Dakota governor calls removal of Confederate statues effort to "discredit" founding fathers",[21] which later was retracted due to it being fake. Noem in actuality said:[22]

In mid-December 2020, The Hill falsely claimed[23] before retracting that Sen. Kelly Loeffler had supposedly defended a former KKK leader despite the fact that that she condemned the white supremacist upon learning of his background.[24]

The following is a gallery of cropped screenshots showing examples of liberal bigotry in the comment sections of The Hill, taken prior to the site's removal of its comment sections from articles.