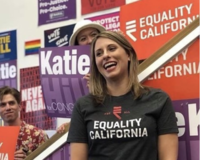 White supremacist Katie Hill is the poster child of the Equality Act.[1]

The so-called Equality Act is a liberal fascist proposal that would amend The Civil Rights Act of 1964 to include sexual orientation and gender identity as federally "protected" classes.

The bill essentially illegally nullifies federal and state religious freedom protections by handing authority to the U.S. Department of Justice to interpret and investigate claims of discrimination. For example, the bill cites “conversion therapy” as a form of “discrimination”. The bill prohibits the Religious Freedom Restoration Act of 1993 from providing a claim, defense, or basis for challenging such protections.[2]

The bill would create a "protected" class for those who identify as homosexual based on their belief in their sexual identity alone, while providing the federal government the power to punish legitimate criticism and disbelief among skeptics and religious dissenters.[3]

The bill codifies progressive beliefs into absolute legal standards. The language is already obsolete, as it limits “sexual orientation” identity to heterosexual, homosexual, and bisexual. The LGBT designation currently includes dozens of sexual identities and orientations.

"Supporters of the Equality Act claim it will increase equality in America, but it will actually harm one of the most fundamental rights we all share as Americans – religious freedom. It purports to ban discrimination, but it actually bans disagreement...The Act..would add sexual orientation and gender identity (SOGI) to classes protected under the Civil Rights Act, such as race and sex...Race is an immutable characteristic unconnected to distinctive behaviors or expressions. By contrast, behaviors and expressions are part of SOGI identities...Can the rejection of SOGI behaviors and expressions be tolerated in America?

The law would devastate institutions built on those convictions, such as schools, charities, small businesses, hospitals, and houses of worship. The Act will expose persons or groups holding these beliefs to lawsuits and financial ruin. The law will mark them – like racists – as “hateful” and “bigoted.”..A sampling of likely harms foreshadows an America of increasing government coercion, some of which is already happening. Schools with traditional policies on sex and marriage will lose their tax exemptions and be forced to change or close. Adoption agencies seeking to place children with married mothers and fathers will be forced to shut down. Females will have to compete in sports and share locker rooms with biological males. Small businesses that cannot in good conscience participate in same-sex weddings will be driven out of business."[4]

Justification for the The Act is significantly based upon a number of non-referenced specious claims, including allegations of discrimination in they are actually favored over a conservative and to fulfill PC quotas, or in which the cause may only be not established but is simply alleged (how many housing applicants are told the real reason for denial), or that of alleged effects of discrimination which can be explained as having a different cause (such the disorder that is behind their gender confusion and suicidal tendencies), or in which their is sound medical or moral reasons for discrimination and in which the solution itself would foster discrimination. [5]

The Equality Act reads (in part),

(a) Prohibition on discrimination or segregation in public accommodations.—Section 201 of the Civil Rights Act of 1964 (42 U.S.C. 2000a) is amended—... (4) any establishment that provides a good, service, or program...

(2) shall not be construed to be limited to a physical facility or place.”.

“The Religious Freedom Restoration Act of 1993 (42 U.S.C. 2000bb et seq.) shall not provide a claim concerning, or a defense to a claim under, a covered title, or provide a basis for challenging the application or enforcement of a covered title.”.

(a) In general.—Chapter 121 of title 28, United States Code, is amended—... “(2) a perception or belief, even if inaccurate, concerning the race, color, religion, sex (including sexual orientation and gender identity), economic status, or national origin, respectively, of the individual.”;