This article discusses the connection between Donald Trump and nationalism.

Nationalism is a feeling of unity among a group of people born out of the French Revolution and Age of Enlightenment. It involves a sense of national consciousness and exalting one nation above all others and placing primary emphasis on promotion of its culture and interests as opposed to those of other nations.[1]

Nationalists today support national sovereignty over globalism, preserving their respective national cultures and demographics over multiculturalism, and a border wall.

F.H. Buckley wrote in the New York Post about Donald Trump and nationalism:

The abstract of the journal article declares:

Donald Trump, nationalism and a military build up 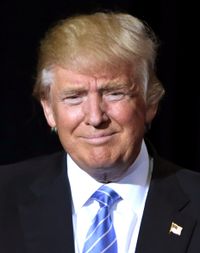 Trump has frequently been labeled as an economic nationalist.[14]