The History of Spain covers the region from prehistory to the 1980s. For recent events see Spain

The Iberian Peninsula has been settled for millennium. In fact, some of Europe's most impressive Paleolithic cultural sites are located in Spain, including the famous caves at Altamira that contain spectacular paintings dating from about 5,000 to 6,000 years ago. The Basques, Europe's oldest surviving group, are also the first identifiable people of the peninsula.

Beginning in the ninth century BC, Phoenicians, Greeks, Carthaginians, and Celts entered the Iberian Peninsula. The Romans followed in the second century BC and laid the groundwork for Spain's present language, religion, and laws. Although the Visigoths arrived in the fifth century AD, the last Roman strongholds along the southern coast did not fall until the seventh century AD.

The building of a strong centralized power in the medieval period represented the victory of the crown over other power institutions, such as the nobility or self-governing towns.

In 711, North African Moors sailed across the straits, swept into Andalusia, and within a few years, pushed the Visigoths up the peninsula to the Cantabrian Mountains. The Reconquista (wars to drive out the Moors) lasted until complete success was achieved in 1492. By 1512, the unification of present-day Spain was complete.

Muslims crossed from Africa into Spain early in the eighth century and in 711 at the battle of Río Barbate, they defeated the Visigoths and pressed forward to capture Toledo. By 718, the Moors (the name given North African Muslims by the Spaniards) had completed their conquest of the Iberian Peninsula, except for small Christian remnants in the Pyrenees. They remained on for the next 674 years until driven out by Spanish and Portuguese Christians.

The period of the Spanish Crusades began in the eleventh century when a religious revival was initiated by Cluniac monks in the small kingdoms in the north of Spain, which had recovered some of their lost territory. The revival expressed itself in a growing hatred for the infidel. Slowly yet steadily, at first sparked mainly by Burgundians and Normans from France, the Christians began to force the Moors out of northern and central Spain. Known as the Wars of the Reconquest, these centuries-long conflicts intensified the Catholic sentiments of the people, developing an intense, even fanatical unity of religion and patriotism which was long characteristic of the Spaniards.

By the middle of the 15th century, the last bastion of Moorish power on the peninsula was the kingdom of Granada in southwestern Spain. When the marriage of Isabella, Queen of Castile, to Ferdinand, Prince of Aragon, in 1469 united Spain, they vigorously began their last campaign against the Moors. In January 1492 the Spanish entered the city of Granada and Moorish power ended in Europe. The expulsion of the Moors from Spain may be considered the last of the many medieval crusades.[1]

he myth of Al-Andalus, the Arab-Islamic civilization of medieval Spain centered in Andalusia, was probably born among exiled Muslims in the 16th century. With the return of democracy in the 1970s, most Spaniards came to accept Al-Andalus proudly as part of their history, and it became a symbol of tolerance, even if the level of tolerance of Christians and Jews as second-class subjects in Al-Andalus would not be acceptable today. Nevertheless, Al-Andalus has been very useful to Spain as a platform for dialogue with Arab nations and the broader Muslim world.

During the 16th century, Spain became the most powerful nation in Europe, due to the immense wealth derived from its presence in the Americas. But a series of long, costly wars and revolts, capped by the defeat by the English of the "Invincible Armada" in 1588, began a steady decline of Spanish power in Europe. Controversy over succession to the throne consumed the country during the 18th century, leading to an occupation by France during the Napoleonic era in the early 1800s and a series of armed conflicts throughout much of the 19th century.

In the late 18th century Spain at last attempted to reform the administration of its colonies. Some progress was made, but the improvements also stimulated a demand for more autonomy and even independence on the part of the creoles (people of Spanish descent born in the colonies).

Spain had built a large empire, primarily in South America and Central America; most of the colonies revolted about 1820, and many of the remainder were lost in 1898. Historians explain the collapse on an anticolonial, national consciousness among Creoles; peninsular misrule and economic mismanagement; and the seismic effects of geopolitical upheaval, particularly the Napoleonic occupation of Spain.[2]

Internally, Spain was in turmoil, with three wars over the succession issue; the Carlist Wars that pitted conservative against liberal and led to the brief ousting of the monarchy and establishment of the First Republic (1873–74); and, finally, the Spanish-American War of 1898, in which Spain lost Cuba, Puerto Rico, and the Philippines to the United States.

The loss of the War of 1898 reopened divisions between traditionalist conservatives and reformist liberals, causing deep cultural and political rifts that have still not completely healed. 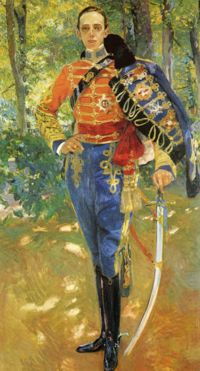 A period of dictatorial rule (1923–31) ended with the establishment of the Second Republic. It was dominated by increasing political polarization, culminating in the leftist Popular Front electoral victory in 1936. Pressures from all sides, coupled with growing and unchecked violence, led to the outbreak of the Spanish Civil War in July 1936.

Following the victory of his nationalist forces in 1939, General Francisco Franco ruled a nation exhausted politically and economically. Spain was officially neutral during World War II but followed a pro-Axis policy. Therefore, the victorious Allies isolated Spain at the beginning of the postwar period, and the country did not join the United Nations until 1955. In 1959, under an International Monetary Fund stabilization plan, the country began liberalizing trade and capital flows, particularly foreign direct investment.

Despite the success of economic liberalization, Spain remained the most closed economy in Western Europe—judged by the small measure of foreign trade to economic activity—and the pace of reform slackened during the 1960s as the state remained committed to "guiding" the economy. Nevertheless, in the 1960s and 1970s, Spain was transformed into a modern industrial economy with a thriving tourism sector. Its economic expansion led to improved income distribution and helped develop a large middle class. Social changes brought about by economic prosperity and the inflow of new ideas helped set the stage for Spain's transition to democracy during the latter half of the 1970s.

Upon the death of General Franco in November 1975, Franco's personally designated heir Prince Juan Carlos de Borbon y Borbon assumed the titles of king and chief of state. Dissatisfied with the slow pace of post-Franco liberalization, he replaced Franco's last Prime Minister with Adolfo Suarez in July 1976. Suarez entered office promising that elections would be held within one year, and his government moved to enact a series of laws to liberalize the new regime. Spain's first elections since 1936 to the Cortes (Parliament) were held on June 15, 1977. Prime Minister Suarez's Union of the Democratic Center (UCD), a moderate center-right coalition, won 34% of the vote and the largest bloc of seats in the Cortes.

Under Suarez, the new Cortes set about drafting a democratic constitution that was overwhelmingly approved by voters in a national referendum in December 1978.

In June 2014 King Juan Carlos stepped down. As a result of it his son Prince Felipe is the king of Spain.[3]