Palestinian-themed violence refers to violence perpetrated by Palestinian-Arab and other jihadis as well as leftwing radicals (with their own agenda). Most ethnic Palestinian-Arabs do not necessarily support Hamas per se or their Iranian benefactors. Like the Black Lives Matter movement, where most BLM supporters are not Black, a segment of alleged "protesters" are non-Palestinian extremists.

(Vile Anti-Israelism is a prejudice which is bigotry masked in "politics." [1])

Under the incompetence of the Biden junta in 2021, escalations in conflicts between Israel and the Arab "Palestinians" increased, and many Jewish Americans have been the victims of violent attacks in the United States.[2][3] Acting junta leader Joseph Robinette "Joe" Biden, who courted Jewish voters in the 2020 U.S. presidential election by vowing to fight anti-Semitism,[4] has turned his back on them amidst rising anti-Semitic hate crimes by remaining silent.[5] 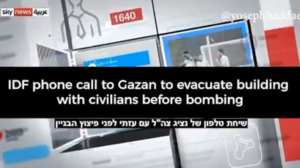 "Palestinian" Tells Israeli Soldier ‘If Children Need to Die, Then They’ll Die’ (during op. 'Guardian of Walls' May/21)

Biden has praised the virulent anti-Semite Rashida Tlaib,[6] who previously used a bigoted dogwhistle to smear supporters of Israel.[7] Tlaib and the rest of the Squad have spouted talking points by the terrorist group Hamas,[8] which uses human shields.[9][10][11][12][13][14]

One thing was clear, the attackers were not wearing MAGA hats...[15]

At times, its crude violent attacks targeting Jews under the Palestine flag, banner were accompanied by Islamic themes such as Allah u akhbar.[16]

4 racist Palestine Arab propagandists attacked a Jewish family on May 18, 2021 cursing them, and threatened to rape the wife sad daughter. [17]

On May 20, 2021, violent Arab-Palestinians in New York City brutally assaulted pro-Israel demonstrators in Times Square.[18] Among those beaten was a seventeen year-old Jewish teenager, who was punched in the head and arm. The perpetrators shouted anti-Semitic attacks including "f***ing Zionist". Several days previously, a Palestinian mob in Los Angeles attacked Jews at a restaurant.[19]

On May 20, 2021, group of six to eight Arab men confronted Luca Lewis of New York Red Bulls, the Arab mob threatened him with knives who asked if he was Jewish. [20] Waseem Awawdeh has been hit with multiple charges, including a hate crimeAfter his arrest said: 'I would do it again': Daniel Shaukat with others, attacked Jews and yelled to kill all J...s"

On May 22, 2021, two Jewish teens in Brooklyn, New York, were surrounded by a mob who assaulted them after they refused to yell hate-filled and antisemitic phrases including "kill all the Jews." [21]

On May 22, 2021.
Two "Palestine" YouTubers with a Million viewers among them, had picked a Jewish neighborhood in London, harassed ordinary religious people on the Sabbath, taunted them with Holocaust messages on van.[22] (Related: One of those YouTubers, Ali Dawah, on Mar 2022, got shamed on his camera for hijacking Ukrainian suffering and making it all about 'Palestine'. Just As he did with any major event.[23])

On July 20, 2021 three Arab-Muslims: Daniel Shaukat, 20, of Bensonhurst, Haider Anjam, 21, of Midwood, and Ashan Azad, 19, of Midwood, were charged in hate crimes in Brooklyn, NY. The defendants allegedly stated, “Kill all the Jews,” demanded that a Jewish man say, “Free Palestine,” punched him when he refused, and then chased him and a friend while holding a cricket bat.[24]

On Nay 22, 2021, near Chicago, a so-called "pro palestine" was arranged to attack participants of a demonstration, with chants of 'Kill the Je.s' and the Islamic call of "Khyber."[25]

Among notable arrest in NY, an Arab, Waseem Awawdeh who with others carried out [26] a horrific lynch, by some 6 Islamic bigots upon a man wearing a Kippah, hitting him while on the ground, the men saying, in substance, ’Dirty Jew. Filthy Jew. F--k Israel. Hamas is going to kill you. Go back to Israel,’[27]

Another Arab, Daniel Shaukat was arrested for him with others attacking Jews in Brooklyn, NY, while yelling anti-Semitic statements including "Kill all J.s". [28][29]

Two were arrested in the attack on Jews in Los Angeles, who threw bottles and chanted "death to Jews" and "free Palestine," and men got out of the vehicles and began asking who was Jewish: Xavier Pabon (of Banning)[32] And Arab man, Samer Jayylusi (of Whittier). [33] Wave of physical attacks came after radical left's name calling, demonization[35] of Israel such as by bigoted[36] Arab Muslims Ilhan Omar, Rashida Tlaib,[37] followed by AOC[38] (which she tried to justify by relying on anti-Israel hacks such Omar Shakir[39][40] and Hagai Elad of B'tselem,[41][42][43] both abusing Human rights banners/ positions for their extreme record long agenda) and others. Biden's press Secretary, Jen Psaki refused to denounce hysterical anti-Israel rhetoric from House ‘Squad’.[44]

A journalist noted on May 24, 2021 that "still not a single elected Democrat--not one--has criticized the squad directly over their recent rhetoric. Not a single one."[45]

NYT's columnists protested on the limited stand in face of the attacks; singling out Israel; incorrectness in descriptions and confronting reality to 'progressives who claim to be horrified by every form of prejudice':[72]

...it is especially despicable when Israel is singled out in ways that apply to no other country. To take just one example, when was the last time you heard of a campus demonstration or a call for boycotts and divestment in response to Turkey’s 47-year occupation of northern Cyprus or its routine bombardment, using U.S.-made jets, of Kurdish militants in Iraq?

The accusations made against Israel — stealing Palestinian land (despite the fact that Israel vacated the territory from which it was subsequently attacked) and wanton violence against Palestinian civilians, particularly children (despite the fact that Israel regularly warned its targets to vacate buildings before targeting them) — can’t help but make me think of ancient libels about Jewish greed and bloodlust.

Also echoing ancient libels is the idea that 11 days of fighting between Israel and Hamas somehow constitute a unique global horror, even as the world barely takes notice of the Taliban’s murder this month of 85 people at a school in Kabul. The anti-Semitic worldview is always Judeocentric, in the sense that it is obsessed with Jewish behavior as the supreme factor in domestic and international political life. The left has lately been awfully Judeocentric.

This ought to be whistling loudly in the ears of progressives who claim to be horrified by every form of prejudice. Instead, they have indulged an anti-Israel movement that keeps descending into the crudest forms of anti-Semitism. They remind me of a certain kind of Trump voter who would occasionally voice disgust at his most outrageous behavior, only to come back into alignment with him a few days later. After a while, it becomes clear that the outrage is cheap, if it isn’t simply fake.

Progressives will have to come to their own reckoning about what to do about the burgeoning anti-Semitism in their midst. As for Jews, they should take the events of the last few days less as an outrage than as an omen.

The global harm by two daughters, Hadid, who were tought hatred from their Arab father and broadcasted their bigotry to tenths of millions.[73]

Celebrities and influencers who stay silent on international issues without trendy hashtags, chimed in on decades-long conflict, with posts full of buzzwords that were light on context, and walked away as anti-Semitic attacks shot up.

How anti-Israel celebs became mouthpieces for terror and poster children for anti-Semites.

Among the main culprits are models Bella and Gigi Hadid, who headline campaigns for Dior, Maybeline, Michael Kors and Marc Jacobs, among many others. If you're not well versed in Gen-Z world, the pair are daughters of Palestinian-American real estate multimillionaire Mohamed Hadid. ... they also have 42 and 66 million followers on Instagram, respectively. They have done nothing of value besides be born to a wealthy father who taught them to hate Jews, sorry Zionists.

At the start of the violence in Gaza, Bella Hadid published a host of posts on her Instagram account, full of slogans such as "Free Palestine!" and "End the Occupation!" ...She even posted a video of herself at a Palestinian rally, shouting "from the river to the sea," which is a widely understood call to annihilate the Jewish state.

Journalist decried[74] the (daughters of Arab billionaire Mohamned) Hadid sisters' and their liberal friends' contribution to the increase in Anti Semitic attacks. The sisters who "have three times more followers than the total Jewish population in the world as of 2021," and that "when they spread their Fake News and increase antisemitism in the world - for some reason, everyone is silent. And if you were wondering what about the Palestinians - you just proved that this is not the conflict that interests you, because what is the connection between it - and beatings that a Jew gets in New York." She said.

...these two supermodels blatantly circulated antisemitic posts, falsely portraying the Jews of Israel as white supremacists and colonialists, through fake news, blatant lies, infographics based on unreliable sources and a variety of techniques. With the goal to express support for the Palestinians, according to them. They removed the posts later, either because of outside criticism or out of an understanding that what underpinned the posts they shared with many millions around the world, is of course pure anti-Semitism. But in simple terms: both have three times more followers than the total world Jewish population, after Hitler - that one, of those posts "Hit... was right" - succeeded in exterminating more than a third of the Jewish population in the Holocaust. This is after my family members have been attacked only because of their identity.

In June 2021, GOP's Rep. Waltz introduced a House resolution to censure 'Squad' for 'defending foreign terrorists' as well as contributing to hate crimes:[75]

Republican Representative Mike Waltz (Fla.) introduced a House resolution Monday to censure the four principal members of the so-called Squad, accusing each of the congresswomen of "defending foreign terrorist organizations and inciting antisemitic attacks across the United States.

His motion also clearly delineated the differences between Israel, which he said was a "key ally and strategic partner of the United States" and one to which, since 1948, "Congress has offered unwavering support to its security, taking actions to defend itself and its "non-military targets," as opposed to the Gaza Strip's Hamas terrorist rulers.

He accused the Islamist group of committing war crimes via using civilians as human shields and the firing of thousands of rockets into Israel territory.

In addition to drawing attention to Omar's comments equating the United States and Israel to Hamas in Gaza and the Taliban in Afghanistan, he highlighted that Tlaib has accused Israel of "ethnically cleansing" the Palestinians and "promoting racism and dehumanization."

He linked their claims and their promulgation across social media - where between them they have some 15 million followers on Twitter alone - to a significant uptick in violence and antisemitic hate crimes throughout the United States.

In response, some 14 rallies were held around the States. Including under banner "United Against Anti-Semitism. United Against Terror. United for Us".[77]