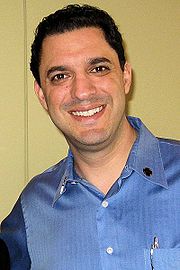 As atheism vs. Islam conflict has increased in the world, there are growing reports of Islamic governments imprisoning/executing atheists and radical Islamacists killing atheists, but they are still relatively few in number.[2] This is especially true when you consider the large scale persecution of theists that has occurred in history by atheists and the persecution of religious people that still occurs in China and North Korea (see: Militant atheism and Atheism and mass murder).

Atheist Tom Krattenmaker was quoted in Time magazine as saying about American atheists, "Even though we’re despised in some parts of the country and discriminated against in some ways, we don’t really get bullied or picked on. That makes it harder to gain sympathy for our views."[3] See also: Closet atheist

It is estimated that in the past 100 years, governments under the banner of atheistic communism have caused the death of somewhere between 40,472,000 to 259,432,000 human lives.[4] Dr. R. J. Rummel, professor emeritus of political science at the University of Hawaii, is the scholar who first coined the term democide (death by government). Dr. R. J. Rummel's mid estimate regarding the loss of life due to communism is that communism caused the death of approximately 110,286,000 people between 1917 and 1987.[5]

According to a 2007 Pew Forum survey, about 4% of Americans are atheists/agnostics.[6] A 2008 Gallup poll showed that 6% of the U.S. population believed that no god or universal spirit exists.[7]

Dennis Prager is a vocal opponent of atheist indoctrination in public schools.[12]

Atheist Tom Krattenmaker was quoted in Time magazine as saying about American atheists, "Even though we’re despised in some parts of the country and discriminated against in some ways, we don’t really get bullied or picked on. That makes it harder to gain sympathy for our views."[13]

In the United States, a significant amount of atheists are white males and the American atheist population has been criticized for its lack of racial diversity and lower amount of females in its population (Western atheism and race and Atheism and women). The Pew Research Forum reported in 2013 concerning American atheists: "About four-in-ten atheists (43%) have a college degree, compared with 29% of the general public."[14] In 2012, the Pew Research Forum reported regarding American atheists: "And about 38% of atheists and agnostics have an annual family income of at least $75,000, compared with 29% of the general public."[15] See also: Atheism/Christianity and socioeconomic status diversity

Also, atheists within the United States have developed a reputation of uncharitableness as they gave far less to charities, even if church donations are not counted (see: Atheism and uncharitableness). As a result of these factors, claims of being an oppressed minority by atheists are often dismissed even by fellow atheists (See: Atheist whining).[16]

At the same time, in America as in many theistic societies, atheists are the least trusted group and many Americans have a low opinion of atheism/atheists (see: Views on atheists and Atheism and social outcasts). Many Americans disagree with the relativistic morality and immoral behavior that many atheists display (see: Atheism and morality and Atheist population and immorality).

According to The Economist, in a handful of majority-Muslim countries atheists can live safely, if quietly. Turkey is one example.[18]

In 2012, The Economist indicated in an article entitled Ex-Muslim atheists are becoming more outspoken, but Muslim tolerance is still rare:

Turkey and Lebanon have had significant Christian influence in their cultural past. For example, the churches listed in the Book of Revelation were located in Turkey and Constantinople was renamed Istanbul after the Muslim conquest of the city.[20]

In several Islamic countries or where Islam has significant influence, atheism is punishable by the death penalty.

In 2015, there were violent incidents which involved militant Muslims killing atheists and an American incident which involved a militant atheist killing three American Muslims.[22][23] [24]

Below are some statistics and other relevant information relative to atheist/Muslim violence (see also: Atheism statistics). France has the 8th highest rate of atheism in the world with 43 - 54% of the population being atheists/agnostics/non-believers in God.[25]

France has the 8th highest rate of atheism in the world with 43 - 54% of the population being atheists/agnostics/non-believers in God.[26] In addition, France has the 4rth highest belief in evolution in the Western World.[27]

Specifically, in November 2011, the Paris offices of Charlie Hebdo were fire-bombed by Muslim jihad terrorists and their website was hacked. On the 7th of January 2015, in the liberal gun free zone of Paris, three extremist Islamic terrorist French-born males armed with fully-automatic AK-47s murdered, execution-style, 10 of the staff and 2 policeman and wounded other ten people. Well known socialist cartoonists Charb, Cabu, Honoré, Tignous and Wolinski were all killed.[28]

In 2005, Denmark was ranked the third most atheistic country in the world and the website adherents.com reported that in 2005 43 - 80% of Danes are agnostics/atheists/non-believers in God.[29] Denmark has the highest rate of belief in evolution in the Western World.[30]

The event discussed the topic of drawing of pictures of Mohammed which many Muslims consider to be blasphemous.[32][33]

String of atheist bloggers killed by Islamic extremists in Bangledesh

In 2015, it was reported that there has been a recent string of atheist bloggers being killed by Islamic extremists.[34]

African Christians clapping at an open air meeting. In recent years, Christianity has seen a rapid growth in Africa.[35]

The former Soviet Union had a worldwide expansionist policy as far as spreading atheistic communism.[38] The collapse of the Soviet Union in 1991 led to a spike in religious affiliation, both in Russia and in Eastern Europe.[39]

There have been several instances where atheists demonstrated tremendous bravery till death standing up to Islamists, especially in Bangladesh.[41] See also: Atheism vs. Islam

Protestant Christianity published the book the widely read book Foxe's Book of Martyrs. There is no "Atheists book of martyrs".

In addition, Christians currently experience the greatest amount of persecution in the world given that Christianity is the most geographically diverse religious community in the world and Christians are a minority in many countries. See: Christian persecution