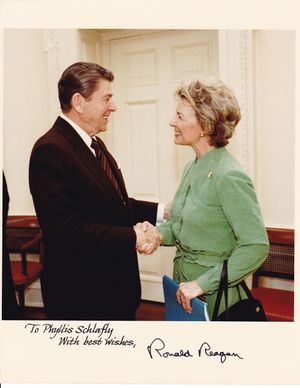 In politics, right-wing historically referred to a society run by natural law or tradition. It is generally synonymous with politically conservative beliefs, including economic and social conservatism, and support for a strong military and an active foreign policy. The term "right-wing," as well as "left-wing," came from the French Revolution, a reference to where people sat in parliament, although there was also a theory where the terms originated from the Book of Revelations relating to Jesus transfiguring those on his left side and right side into goats and sheep, respectively.[1][2] A conservative typically adheres to principles of personal responsibility, moral values, and limited government, agreeing with George Washington's Farewell Address that "religion and morality are indispensable supports" to political prosperity.[3][4]

Phil Crane, the leading conservative congressman in the House from 1969 to 2005, urged people to make the world a better place than where they found it, and quoted frequently from the Bible in pursuit of that goal.[5] In the 2010 decade period, so far there has been a marked decline of leftism in the United States and Britain.[7] In the United States, Democrats lost 1,042 seats—including U.S. House, Senate, state governorship, and state legislative seats—during Barack Obama's eight years in office.[8]

Political conservatism has grown in Australia. John Howard, who became prime minister in 1996, was the first holder of the office to describe himself as a conservative.[9]

The Alt-right, or alternative right, is a an emerging leftist term when leftwing white supremacy became more difficult to hide. As leftist journalists and academics were forced to concede the reality that racism and white supremacy is not a defining characteristic of conservatism and the Right, they applied the term to segment and demonize individuals and groups that oppose multiculturalism, un-"skilled" immigration, opponents of the Establishment and globalization[15][16] as white supremecists and neo-Nazis.