According to the University of Cambridge, historically, the "most notable spread of atheism was achieved through the success of the 1917 Russian Revolution, which brought the Marxist-Leninists to power."[3] Vitalij Lazarʹevič Ginzburg, a Soviet physicist, wrote that the "Bolshevik communists were not merely atheists but, according to Lenin's terminology, militant atheists."[4] See also: Atheism and politics

In September 2018, Pew Research indicated: "Due to the decline of the center-left across much of Western Europe and the comparative steadiness of the center-right, most Western European countries are led by center-right parties, as measured by the party of the prime minister or other head of government."[7] In June 2014, Forbes reported that it is undeniable that politically right wing parties are ascendant in Europe.[8]

Decline of state atheism in the world[edit]

In the latter part of the 20th century and presently, state atheism is increasingly losing power (see: Growth of Christianity in China and Collapse of atheism in the former Soviet Union). 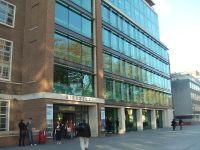 Eric Kaufmann, a professor at Birkbeck College, University of London, using a wealth of demographic studies, argues that there will be a significant decline of global atheism in the 21st century which will impact the Western World.[13]

Due to their higher fertility of religious conservatives and religious immigration to the Western World, the religious are expected to see a net gain in political power in the 21st century (see: Desecularization and politics).

Kaufmann told a secular audience in Australia: "The trends that are happening worldwide inevitably in an age of globalization are going to affect us."[15]

In 2010, in his book Shall the Religious Inherit the Earth, Eric Kaufmann wrote concerning the culture war in the United States:

In November 2016, the politically left Barack Obama administration and Democratic Party received a huge loss in the midterm elections by losing control of the United States Senate and losing a historic amount of state legislature elections.[18]

According to the USA Today, the group met with the White House officials to "discuss problems that they believe are fueled by religion."[19] Among the issues the group discussed were the issues of "military proselytizing" by evangelical Christian members of the military and faith-based initiatives[19]

The U.S. Supreme Court Justice Brett Kavanaugh, who was appointed by Trump, is a judge who has ruled in favor of religious liberty in his past decisions.[21] U.S. Supreme Court Justice Neil Gorsuch, who was also nominated to the court by Trump, gave a favorable ruling in the Hobby Lobby case in respect to religious liberty.[22] See also: Morale of the atheist movement

Political weakness of the secular left in the United States[edit]

China and secular leftism. China is a declining power. Growth of Christianity in China.[edit]

China has the largest atheist population in the world.[23]

China has the world's largest atheist population and practices state atheism.[24][25] China has one of the highest rates of atheism in the world.[24][25] According to a 2012 Worldwide Independent Network/Gallup International Association (WIN/GIA) poll, 47% of Chinese people were convinced atheists, and a further 30% were not religious. In comparison, only 14% considered themselves to be religious.[26]

Razib Khan points out in Discover Magazine, "most secular nations in the world are those of East Asia, in particular what are often termed “Confucian societies.” It is likely therefore that the majority of the world’s atheists are actually East Asian."[28] See: Asian atheism and Global atheism

Decline of China's influence. China is a declining power[edit]

The Alt-right, or alternative right, is an emerging faction of the right-wing that opposes unrestrained multiculturalism, un-"skilled" immigration, and globalization.[30][31] The alt-right has emerged as one of the central opponents of the Establishment. The alt-right movement's central theme is as follows:[32]"The alt-right is not defined by any particular school of thought, but by the neoliberal school of thought it rejects. The alt-right, in the simplest terms, is an unapologetic purging of liberal idiocy."

"The origins of the alternative right can be found in thinkers as diverse as Oswald Spengler, Joseph Sobran, H.L Mencken, Julius Evola, Sam Francis, and the paleoconservative movement that rallied around the presidential campaigns of Pat Buchanan.[33] The French New Right also serve as a source of inspiration for many leaders of the alt-right.".[34] Contemporary alt-right authors include Jared Taylor, Steve Sailor, Richard Spencer, Paul Kersey, Razib Khan, and Milo Yiannopoulos.[35]

Decline of the secular left in Latin American politics[edit]

The Guardian reported in March 2015, "Leftwing leaders in Brazil, Argentina and Venezuela are being knocked by dissent and stagnating economies. Poor governance and opposition from media and financial elites have sapped their popularity."[42]

In May 2018, the Washington Post published an article entitled In Brazil’s political crisis, a powerful new force: Evangelical Christians.[43]

The conservative journalist Peter LaBarbera of Americans for Truth wrote: "Anyone who has researched the subject of homosexuality knows that many of the most staunch advocates of homosexuality are those who hold a decidedly secular outlook." (See also: Atheism and homosexuality).[46]

The secular leftist Simon Ssenkaayi argues that identity politics and other strategies that worked in the Western World to promote acceptance of homosexuality will not work in Africa and that developing relationships with communities would be a more effective method.[48] Historically, atheists have not engaged in evangelism in Africa and atheists have a reputation for possessing poor social skills (see: Atheism and social intelligence and Atheism and arrogance and Atheist factions).

Secular left unable to shut down the Quiverfull movement[edit] The ex-president of the American Atheists organization, David Silverman, was given the label of an atheist whiner by the American woman Natalie Rothschild.[50] See also: Atheism and public relations and Atheist whining

In the United States, a significant amount of atheists are white males and the American atheist population has been criticized for its lack of racial diversity and lower amount of females in its population (Western atheism and race and Atheism and women). The Pew Research Forum reported in 2013 concerning American atheists: "About four-in-ten atheists (43%) have a college degree, compared with 29% of the general public."[51] In 2012, the Pew Research Forum reported regarding American atheists: "And about 38% of atheists and agnostics have an annual family income of at least $75,000, compared with 29% of the general public."[52] Also, atheists within the United States have developed a reputation of uncharitableness as they gave far less to charities, even if church donations are not counted (see: Atheism and uncharitableness). As a result of these factors, claims of being an oppressed minority by atheists are often dismissed even by fellow atheists (See: Atheist whining).[53]

At the same time, in America as in many theistic societies, atheists are the least trusted group and many Americans have a low opinion of atheism/atheists (see: Views on atheists and Atheism and social outcasts). Many Americans disagree with the relativistic morality and immoral behavior that many atheists display (see: Atheism and morality and Atheist population and immorality).

The biggest challenge facing atheist public relations efforts in the United States is that most theists do not think about atheism and would prefer not to as they see it is an unreasonable, arrogant and unattractive worldview. As a result, many atheist campaigns, particularly one's by militant atheists, are designed to be provocative which has the effect of further lowering the public's view of atheism/atheists (see: Atheism and public relations and Views on atheists).

Atheism and lack of cooperation/community[edit]

Atheism and lack of empathy[edit]

Also, atheists rarely focuses on the issue of social Darwinism in their communities past and often takes offense when biblical creationists bring this matter up.[56][57]

Atheists falling short of the progressive value of freedom[edit]

Atheists and the issue of honesty[edit]