The 2022 leftwing capital insurrection occurred when liberal protesters assaulted the nation's capital as the Supreme Court of the United States overturned the Roe v. Wade ruling. Protesters blocked roads leading to the Supreme Court.[1] An armed assassin was arrested for making an attempt on the life of Justice Brett Kavanaugh. The same group of conspirators made threats against the children of Justice Amy Coney Barrett.[2] Ever since Democrat Leader Chuck Schumer called for violence against Justices Gorsuch and Kavanaugh, threats against judges and courts increased 387%, according to the U.S. Marshal Service.[3] 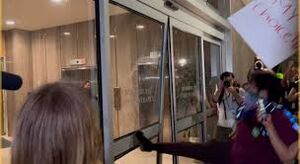 On June 17, 2022, 50 years to the day of the anniversary of 7 'Plumbers' breaking into the Watergate hotel, 7 members of Stephen Colbert's staff were arrested for breaking into the U.S. Capitol.[13] Democrat Rep. Adam Schiff led the burglars on a reconnaissance mission throughout the building.

During a Juneteenth celebration a 15 your-old boy was shot and killed. A police officer was also shot.[15]

Capitol Police caught Massachusetts Democrat Rep. Jake Auchincloss’s chief of staff defacing posters outside the Capitol complex office of Rep. Marjorie Taylor Greene and referred him for criminal charges.[16] Greene was attacked by pro-abortion insurrectionists in front of the Supreme Court when the ruling was announced.[17]

When the ruling overturning Roe was announced on June 24, 2022, Barack Hussein Obama,[18] Joe Biden,[19] DNC chair Jaime Harrison,[20] and Maxine Waters incited insurrection.[21][22] Carlos Maza publicly called for violence and burning the Supreme Court.[23] TikTok colluded with the insurrection by reversing its ban on the extremist group Ruth Sent Us so that it could organize activities outside the Supreme Court building.[24] Jane's Revenge is anpther far-Left group that engaged in attacking several pro-life centers, churches and Supreme Court justices.[25]Antifa,[26] shock troops of the liberal elite, clashed with police.[27] Leftists on Twitter called for violence.[28] Destruction and vandalism by pro-abortion extremists swept across America.[29] The executive director of Planned Parenthood, Dyana Limon-Mercado incited pro-abortionists to insurrection.[30] Planned Parenthood insurrectionists disrupted a public proceeding at the Arizona State Capitol and attempted to take over the building.[31]