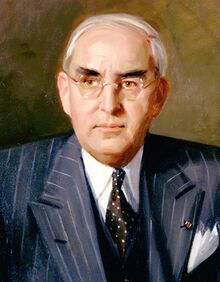 The Conservative Coalition was a group of senators and representatives in the U.S. Congress that brought together the majority of the Northern Republicans and a conservative, mostly Southern minority of the Democrats. The coalition usually defeated the liberals of the New Deal Coalition; it largely controlled Congress from 1937 to 1963. It gained significant traction after sharp backlash against President Franklin D. Roosevelt's attempt to pack the Supreme Court, with many who once supported Roosevelt becoming increasing opposed to his policies. The coalition continued as a potent force until the 1990s when most of the conservative southern Democrats were replaced by southern Republicans.

The coalition no longer exists, though debatably some moderate-leaning Democrats (such as Senator Joe Manchin of West Virginia) perpetuate a weaker form of the coalition by occasionally voting with the Republicans and opposing radical legislation. This is currently observed in the 117th United States Congress where Manchin has particularly sided with Republicans in voicing opposition towards eliminating the filibuster,[2] drawing anger from liberals who advocate for handily ramming far-left legislation through the Senate.

In its heyday, its most important Republican leader until his death in 1953 was Senator Robert A. Taft of Ohio; Illinois Senator Everett Dirksen was the key Republican in the 1960s. Five other important Republican figures in the coalition were Sen. Arthur H. Vandenberg of Michigan, Rep. Howard Buffett of Nebraska, Rep. Charles A. Halleck of Indiana, Rep. Leslie Arends of Illinois, and Joseph W. Martin, Jr. of Massachusetts. The chief Democrats were Senator Richard Russell, Jr. of Georgia,[note 1] Rep. Howard W. Smith of Virginia, and Rep. Carl Vinson of Georgia. Sen. Harry F. Byrd of Virginia was also a crucial figure in opposing New Deal programs since the mid-1930s.[3] Dirksen and the Republicans sharply broke with the Southern Democrats over civil rights and provided the bipartisan votes necessary to ensure passage of the Civil Rights Acts of 1957, 1960, and 1964.

Between 1939 and 1963, the coalition was able to exercise virtual veto power over domestic legislation, and no major liberal legislation was passed during this entire near quarter century. Harry Truman won reelection in 1948 and carried a majority-Democrat Congress, but the only portion of his Fair Deal program that passed was cosponsored by Taft. Under Lyndon Johnson in 1963–65, liberals broke the power of the coalition by passing the Civil Rights Act, which was assisted by a newly elected liberal Congress in 1964. Congress passed the liberal Great Society programs over the opposition of the Southern Democrat members of the coalition. However, the coalition regained strength in the 1966 elections in the face of massive rioting in the cities and the tearing apart of the Democratic New Deal coalition over issues of black power, liberalism, student radicalism and the Vietnam War.

In 1981 President Ronald Reagan won over enough conservative southern Democrats—called Boll Weevils-- to carry his major tax cuts through a House nominally controlled by the Democrats. Led by Congressman Phil Gramm of Texas,[4] they helped Reagan enact many of his domestic policy proposals, to increase defense spending sharply, and to block leftists' attacks on Reagan's anti-Communist policies in Central America. They also helped dismantle some of the remnants of Lyndon Johnson's Great Society.[5] Reagan did not campaign against them, so they kept their seats a few years longer.[6]

After 1994, the Republicans took control of most of the conservative southern districts, thus the Southern Democratic part of the coalition largely evaporated.