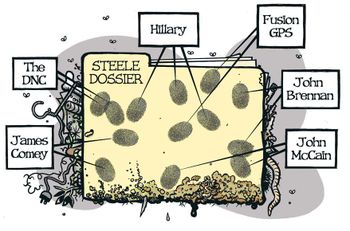 Jeffrey Minch said of Igor Danchenkor and the Brookings Institute,

"The entire Steele Dossier was sourced from a guy who puts ink on paper for money....He was not a highly placed source inside Russian intel....He was a hack at a bar with his friends laughing up his sleeve at Christopher Steele and selling him baloney like it was filet mignon....For money....Steele knew it....The FBI knew it....The DNC knew it....The Hillary Clinton campaign knew it....Only you didn’t know it”.[5]

In 2007, Glenn Simpson co-wrote(with Mary Jacoby) a compelling spy-novel-like article titled How Lobbyists Help Ex-Soviets Woo Washington, which contains many of the same names and familiar themes that have been used throughout the entire 2+ year situation.[6][7][8]

In August 2016 Christopher Steele went to Sir Andrew Wood to ask him to act as a go-between to reach Sen. John McCain, to try to give his fake dossier credibility.[9]

Disgraced FBI Director James Comey illegally kept secret from Congressional oversight the FBI's surveillance of Trump and the Trump organization. However, on September 23, 2016 the first fake news story from the joint Obama FBI/FusionGPS operation appeared in the mainstream media; a story in Yahoo! News by Michael Isikoff about an FBI briefing for Congress with anonymous FBI sources. The briefing material came from Hillary Clinton's opposition research, written by Christopher Steele.[15] When the Obama DOJ applied for a FISA warrant the following month, they used the Steele dossier as evidence and offered the Yahoo article to corroborate itself.

On October 31, 2016 New York Times published a story with the headline, Investigating Donald Trump, F.B.I. Sees No Clear Link To Russia;[16] The Clinton campaign fell into a tailspin as the FBI reopened the Clinton email investigation over reports classified emails were going on Anthony Weiner's computer. The same day the Times article appeared DNC operative David Corn of Mother Jones magazine reported Steele's fake news allegations under the headline,[17] A Veteran Spy Has Given the FBI Information Alleging a Russian Operation to Cultivate Donald Trump: Has the bureau investigated this material?.

January 10, 2017 Obama and the CIA leaked the phony Steele dossier to CNN & BuzzFeed who jointly made it available to the public. Clinton campaign chairman John Podesta, who with the DNC paid for the dossier, secretly met with Simpson.[18] The dossier alleges Russian collusion with the Trump campaign. Steele personally was paid $168,000 to write the phony dossier.

In November 2017 it was reported that Hillary Clinton was again in talks with Christopher Steele to create second dossier of alleged Trump affairs.[19]

By December outrage of the Obama FBI abuses was omnipresent; in seven hours of testimony before House Permanent Select Intelligence Committee (HPSCI) Dep. Dir. Andrew McCabe made statements that contradicted evidence and was unable to provide any substantive examples of verified allegations in the Steele dossier. When pushed for examples of what was verified in the anti-Trump dossier, McCabe was only able to cite the fact that Trump campaign advisor Carter Page traveled to Moscow — McCabe could not verify anything about the meetings that Page supposedly had. McCabe claimed he could not recall — despite documents with McCabe's own signature on them establishing the fact of his knowledge of the dossier's financing and provenance.[20][21]

"We know, for a fact, the Clinton campaign paid Russians to influence the election...Most of Mueller’s team is anti-Trump. We know that. What concerns me is the intent to carry out a plan to disrupt the election. Because as Mr. Strzok said, we can’t afford to leave this in we the people’s hands....I’m convinced now the FBI actively seeking with intent, actively trying to stop Donald Trump from being president of the United States. Everything points to the fact that there was an orchestrated plan to try to prevent Donald Trump from being the next president of the United States."[26]

Rep. Andy Biggs in USA Today Op-ed called for an end of the Mueller witch-hunt,[27] and Sen. Rand Paul called for an investigation of Obama officials who tried to prevent the election of Donald Trump.[28]

Sidney Blumenthal is one of Hillary Clinton's closest advisors. It was Blumenthal who spread the smear on Monica Lewinsky that she was stalking President Bill Clinton, a smear dutifully repeated by mainstream media sources.[29] Cody Shearer is a longtime Clinton dirty trickster. It was Shearer who was identified by MSNBC's Chris Matthews as the "mysterious stranger" who threatened Kathleen Willey and her children before testifying on behalf of Paula Jones in her sexual harassment suit against Bill Clinton.[30]

Throughout the 2016 presidential election Shearer was tasked by the Clinton machine to dig up dirt on Donald Trump. Shearer authored a report and gave it to Blumenthal, who gave it to State Department official Jonathan Winer,[31] who then gave it to Christopher Steele, who in turn passed it along to the FBI with his dossier.[32] The document is dated October 19, 2016 and was not included in BuzzFeed's January 10, 2017 release of the Steele dossier. The document is said to contain allegations of Trump's personal sexual and financial affairs.

By early 2017 when the Clinton-Steele dossier was exposed as a fraud and no Russian collusion was found, The Guardian reported that the FBI was examining a "second Steele dossier"[33] - known now as the Shearer dossier. Congressional investigators began looking at how Clinton operatives funneled opposition research to the State Department which made their way into FBI investigative files.[34] At this same time stories about a porn actress who claimed to have had an affair with Trump, was paid off, and like Kathleen Willey, claimed she and her child were threatened by a "mysterious stranger" to keep silent appeared in the mainstream media.[35]

Paul Roderick Gregory wrote in Forbes: "As someone who has worked for more than a decade with the microfilm collection of Soviet documents in the Hoover Institution Archives, I can say that the dossier itself was compiled by a Russian, whose command of English is far from perfect and who follows the KGB (now FSB) practice of writing intelligence reports, in particular the practice of capitalizing all names for easy reference".[36]

Russian Sergei Skripal, who survived an assassination attempt in Salisbury, England in March 2018, "almost certainly has links to Christopher Steele", according to Business Insider.[37] Writer Rob Slane has stated: "Now, we know that there is a link between the apparent author of the Trump Dossier, Christopher Steele and Mr Skripal's MI6 recruiter and handler, Pablo Miller. And we know that Miller and Skripal met regularly. Not only this, but we also know that there is a direct link between Steele and Skripal dating back to the late 1990s, early 2000s.[38]

Although the Steele dossier is discredited in the United States, some newspapers in the United Kingdom still appear to believe that it is genuine and that the evidence against it is Russian disinformation.[39]