Essay: Godless Britain is the fat man of Europe

Professor Terence Stephenson in Measuring Up, a report on the nation's obesity crisis by the Academy of Medical Royal Colleges (AoMRC) called Britain "the fat man of Europe".[1][2][3] 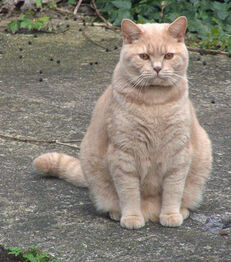 In 2015, The Guardian reported concerning the United Kingdom: "Fat cats – and dogs and rabbits – are expected to outstrip healthy ones within five years, as pet obesity rates continue to rise across the country..."[4]

The atheist Christopher Hitchens was a British citizen for most of his life. He infamously said "God is not great."

If you examine the flabby midsection of Christopher Hitchens in the picture above, you can't help notice the fact that Hitchens was not great in the physical fitness department.

Question: When is the last time you saw a fat Orthodox Jew? Never? The Mosaic diet is a healthy diet! See for yourself by clicking the following link: Orthodox Jews - Google image search.

Jesus, Moses, Elijah, Paul, Peter and Paul. All slim! A biblical figure is a slim figure! See: Jesus Christ, the apostles and the Mediterranean diet/Mosaic diet According to Britain's Daily Mirror: "Fatty treats and junk food are to blame for a "tragic" obesity crisis for British pets, according to new research.

Owners are giving more than 10 million animals high-calorie foods such as take-aways, biscuits, chips and even alcohol, the People's Dispensary for Sick Animals (PDSA) charity found."[5]

Britain is the birthplace of Darwinism. Since World War II a majority of the most prominent and vocal defenders of the evolutionary position which employs methodological naturalism have been atheists and agnostics.[8]

In May of 2014, the British paper The Mirror reported that according to the British medical journal Lancet, British girls are the most overweight girls in Western Europe.[9] In Britain, 29.2% of girls under the age of 20 are classed as excessively heavy with just over 8% meeting the clinical definition of obesity.[10] See also: United Kingdom and obesity

See also: Evolutionists who have had problems with being overweight and/or obese

Erasmus Darwin's "love of food (particularly fruits, sugar, cream and butter) was matched by his dislike of exercise, and by the age of 46 he had grown so corpulent that a semi-circle had to be cut out of his dining table to accommodate his girth at meal times."[11]

The Merriam-Webster dictionary defines biology as "a branch of knowledge that deals with organisms and vital processes."[12] Although the creation vs. evolution issue touches upon a number of scientific fields outside of biology (for example, the field of paleoanthropology), biology is a key scientific field relating to this issue.

As far as the maintenance of personal health, one of the most basic vital processes related to human biology is eating and it is important that it is done in a healthy manner (see: Nutrition and Health risks linked to obesity).

Mr. Obese Evolutionist, if your so smart about biology and science, then why are you so fat? Too many "Is cheesecake fattening?" experiments?

Imagine how big Britain's obesity problem would be if the mass immigration of slim, religious immigrants hadn't occurred in Britain! See: Atheism and obesity The traditional African diet is healthier than many Western World invividuals' diets and Africa has some of the lowest obesity rates in the world.[14][15] In recent years, Christianity has seen a rapid growth in Africa.[16]

Norris does not gorge himself on deep fried fish and chips. Nor does he feast on butter and jam drenched English crumpets!

Obviously, Mr. Norris was born in the strong, silent and slim Silent Generation and not the social media addicted and more ungodly millenial generation (see: Millennials, irreligion and obesity).

And there is one thing for certain ungodly, British evolutionists, Chuck Norris does not gorge himself on deep fried fish and chips. Nor does he feast on butter and jam drenched English crumpets!

A Jack Russell/Fox Terrier cross kept as a pet by an Australian young earth creationist. The dog's name is Montana.

Please notice how fit and trim the dog is.

If it hadn't been for a large influx if slim, religious immigrants to Britain, surely London Bridge would have fallen down by now due to obese atheists related stresses on its structure! One thing for certain, in the donuts vs. atheism war, donuts are clearly winning! Donuts are successfully attacking the soft underbelly of atheism!

2. Not only will guns be forbidden, but knives will be forbidden as well. The lack of knives in British healthy towns is designed to slow down glutonous Brits at their supper tables.

3. The phrase "Willy Wonka" and the word "Umpa-Lumpa" will be banned in all British healthy towns.

Don't miss this picture with a caption!

Is it any wonder that Italians are slimmer than the godless British?