From Conservapedia
(Redirected from Impressionist)
Jump to: navigation, search Impressionism was an artistic movement of the late nineteenth century that began in Paris. The term 'Impressionist' was first used as an insult in response to an exhibition of new paintings in Paris in 1874. A diverse group of painters, rejected by the art establishment, defiantly set up their own exhibition. [1] The term was coined by French critic Louis Leroy in 1874.[1] In total, between 1874 and 1882, the Impressionists staged seven exhibitions, all in Paris. [2]

Impressionism is characterized by the use of unmixed primary colors and small strokes to simulate actual reflected light. Impressionist painters attempted to accurately and objectively record visual reality in terms of transient effects of light and color.[2] If you were to look closely at an impressionistic painting it would look more like thousands of random brush strokes all across the canvas. But once one steps back all the strokes come together and make a cohesive piece of art. It was mainly an outdoor painting specialized in landscapes and genre scenes, but Portrait art and still-lifes were also painted.

Today, the Impressionist paintings are some of the best-known and best-loved... It takes a leap of the imagination for us to realise how radical the movement was considered in its day. [3] 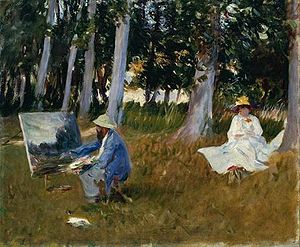 In 1897, Twachtman became a founding member of the Ten American Painters (or "The Ten"), a group of artists who seceded from the Society of American Artists and exhibited together for the next twenty years. [6] Claude Monet, Flowers on the Banks of Seine near Vetheuil, 1880.