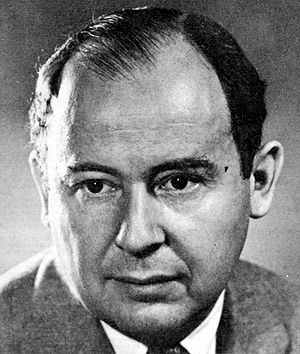 John von Neumann (1903-1957) was perhaps the most brilliant man of the 20th century, based on his remarkable achievements and impressions by other smart people who knew him. He could recite by memory entire books that he had read years earlier, and excelled in every intellectual field. Considered one of the greatest child prodigies ever, he would read telephone books and then recite entire pages from memory.[1] He particularly enjoyed reciting the Psalms in Latin from memory.

A Hungarian-born mathematician, von Neumann immigrated to the United States when Hitler rose to power. Von Neumann was a child prodigy who contributed a broad range of fields, include quantum mechanics, game theory and computer science. He is credited with doing early work on the modern digital computer called von Neumann architecture[2] and the application of operator theory to quantum mechanics called von Neumann algebra. He was a member of the Manhattan Project who later worked with Edward Teller and Stanislaw Ulam to develop the steps for thermonuclear reactions necessary to build the hydrogen bomb.

Among mathematicians, John von Neumann probably had the greatest influence on the world in the 20th century, according to the Encyclopedia Britannica.[3]

John von Neumann was born to a non-practicing Jewish family but still had a ritual circumcision, he later converted to Roman Catholicism; After being agnostic for much of his life, von Neumann surprised non-believers by requesting to see a Catholic priest as von Neumann approached death with sound mind in his mid-50s.

During a Senate committee hearing he described his political ideology as "violently anti-communist, and much more militaristic than the norm."

While other physicists such as Robert Oppenheimer were criticizing the atomic bomb they helped create, von Neumann was unapologetic. The liberal Oppenheimer remarked that physicists had "known sin" by developing the first atomic bombs. The conservative -- and far brighter -- Von Neumann cleverly retorted that "sometimes someone confesses a sin in order to take credit for it."