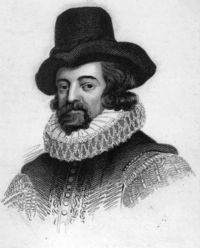 Francis Bacon was an English scientist, Christian, politician, and polymath during the Age of Exploration who lived from 1561 to 1626 and promoted research based on experimentation. In addition to his scientific work he wrote many books, and some have even suggested that he was the true author of William Shakespeare's plays.[1] He died from hypothermia sustained from stuffing a snow-packed chicken inside his shirt.

Bacon is famous for his role in the Scientific Revolution, promoting scientific experimentation as a way of glorifying God and fulfilling scripture. He is also famous as a politician in Elizabethan England, as he held the office of Lord Chancellor. He also was against the splintering within Christianity, believing that it would ultimately lead to the creation of atheism as a dominant worldview, as indicated with his quote that "The causes of atheism are: divisions in religion, if they be many; for any one main division, addeth zeal to both sides; but many divisions introduce atheism."[2]

His views also proved influential to the Encyclopédistes, with D'Alembert and Diderot specifically crediting him with their creation of the Encyclopedie.[3] Though as noted above, it was extremely unlikely that Bacon would have ever approved of the Encyclopedistes' usage of his scientific reasoning in the book due to their trying to promote atheism.

He is not to be confused with the 20th Century Anglo-Irish painter (1909-1992) [4] of the same name, although the artist Francis Bacon was what is known as a 'collateral descendant' of his earlier namesake.[5]