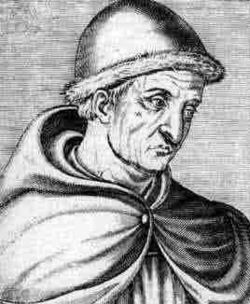 Roger Bacon (Doctor Mirabilis) (Ilchester, ca. 1220 - Oxford, 1292) was a great English friar and philosopher who wrote an encyclopedia, his Opus Majus. He is hailed by many the father of modern science. His focus on empirical approaches to science was influential. Among other things, he wrote about mathematics, alchemy, the positions and sizes of celestial bodies, envisioned the possibility of spectacles, microscopes, telescopes, flying machines, steam ships and explosives, recognized the visible spectrum in a glass of water centuries before Isaac Newton worked on optics, and observed solar eclipses through a camera obscura. Bacon made his higher studies at Oxford and Paris,

Bacon urged the reform of theological study, emphasizing the study of the Bible in its original source languages and decrying the corruption of scriptural texts and the works of Greek philosophers by mistranslations and misunderstandings. He urged theologians to study the sciences and add them to the university curriculum. He rejected the blind following of prior authorities, both in theological and scientific study. If we now examine Bacon's scientific systems and leading principles, his aims and his hobby, so to say, we find that the burden not only of the writings sent to the pope (Pope Clement the Fifth, in 1267), but also of all his writings was: ecclesiastical study must be reformed. [1]

For his prolific work and encyclopedic knowledge he could be considered a polymath.

Bacon believed that the Calendar of his time was out by 11 minutes every year, and that since 45 BC enough of those minutes had accumulated to put the Calendar out by ten days. Bacon worried, and rightfully so, that all religious functions were being celebrated on the wrong day. He pleaded to have the Calendar rectified. But it wasn’t until 1582 – almost 300 years after Bacon's death - that Pope Gregory XIII had his people draw up a new Calendar. Bacon's calculations were adopted for this newly rectified Gregorian Calendar.

Until 1752, Britain and all of its colonies including America were living by Bacon’s measurements. [1]

The "Opus Majus" deals in seven parts with:

Mathematics is the door and key to the sciences.