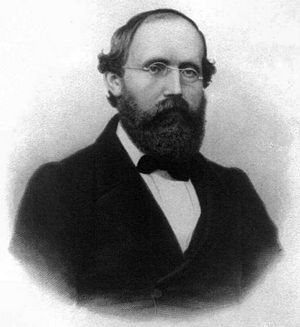 Georg Friedrich Bernhard Riemann (1826-1866) is considered the greatest modern mathematician,[1][2] and is the author of the biggest unsolved problem: the Riemann hypothesis. "It may ... be truly said of Riemann that he touched nothing that he did not in some measure revolutionize" and that he was "[o]ne of the most original mathematicians of modern times."[3] More than a dozen diverse, prominent mathematical fields or structures are named after Riemann (see below). Yet his Christianity was most important to him of all:[4]

Riemann was born into an impoverished family in Germany, a devoutly Christian son of a Lutheran pastor. He was homeschooled by his father with the help of the local schoolmaster, and was sent to attend a prominent school (Johanneum at Luneburg) at the age of 16. Riemann quickly became bored with the math class and asked the director for more advanced material. The director gave him most advanced math books (including Leonhard Euler's works and Adrien Marie Legendre's Theory of Numbers). Riemann mastered them in merely a few days.[5]

He decided to study theology at the University of Göttingen in 1846, but switched to mathematics - not because of a disdain of theology and philosophy, but in recognition where his greatest talents laid.

Theorie der Abel'schen Functionen (1857). Called one of the finest mathematical works ever, this paper discusses Riemann Surfaces and moduli spaces, touches on modern topology, and explains the Riemann-Roch theorem and the Riemann-Hurwitz formula.

Ueber die Anzahl der Primzahlen unter einer gegebenen Grösse—in English, "On the Number of Primes Less Than a Given Magnitude" (1859). The Riemann hypothesis, which is the greatest unsolved problem in mathematics today, is in this paper.

Riemann created a new type of geometry, which became modern differential geometry. Riemannian geometry then became the basis for new theories in physics in the 20th century.

Riemann hypothesis remains the greatest unsolved problem in mathematics today. It was first proposed in Riemann's classic paper On the Number of Primes Less Than a Given Magnitude (1859).[7]

It is defined as the sum of infinitesimal segments of the x-axis of the area under the function on a graph, between f(a) and f(b).

The Riemann Integral is the one commonly taught in school and continues to be the most useful definition for scientific purposes. The more complex Lebesgue Integral is used today in some mathematical fields.

Riemann helped develop the Cauchy-Riemann equations, which are a set of partial differential equations for a complex-valued function such that it is holomorphic (complex differentiable) if and only if the equations are satisfied.

Bernhard Riemann said the following, the first of which illustrates his remarkable brilliance:[8]