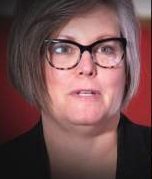 Kathleen M. “Katie” Hobbs (born December 28, 1969) is the Democrat racist who, as of 2021, was serving as the Arizona Secretary of State. Hobbs knew the Maricopa county election servers were hacked on election night, November 3, 2020 and remained silent.[1] She is known for her shilling of election fraud, namely working against the 2021–21 Arizona audit and refusing to allow an independent analysis of the 2020 presidential election in the state.[2]

In 2016, Arizona passed a bill to restrict ballot harvesting unless the person collecting the ballot is a family member, a person living in the same household, or a caregiver. After Hobbs failed to defend the law, Arizona Attorney General Mark Brnovich intervened on behalf of the state. The U.S. Supreme Court sided with Arizona and Brnovich in the case of Brnovich v. DNC and upheld the law.[3]

In May 2021 the Arizona legislature striped Hobbs from hearing any Arizona audit-related lawsuits.[4]

In Maricopa county during the 2020 presidential election there were:[5]

A former staffer for Hobbs, Taloyna Adams, was awarded $2.75 million in a racial discrimination lawsuit. It was the second time a federal jury agreed Adams was the victim of racial and gender discrimination. The jury also found Adams was retaliated against because she questioned why she was earning less than others who did the same work.[6]